The Daily Beast: "Damages Premiere: The Creators on That Twist, Julian Assange & The Final Season" 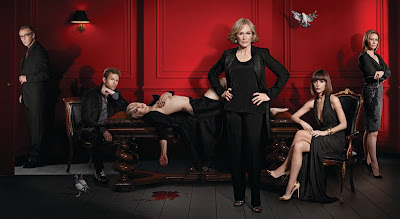 Over at The Daily Beast, you can read my latest feature, "Damages Premiere: The Creators on That Twist, Julian Assange & The Final Season," in which I talk to the creators of the serpentine legal thriller Damages about the show’s final season, WikiLeaks and Julian Assange, and THAT shocking twist. (You know which one I'm talking about.)

Season 5 revolves around a WikiLeaks-esque website and issues of corporate transparency, but what fans are really waiting for is for Patty and Ellen to finally throw down against each other. One of them, it seems, may not walk away from this five-years-in-the-making battle.

The Daily Beast caught up with Damages’ trio of creators—Glenn Kessler, Daniel Zelman, and Todd A. Kessler—to discuss how they approached wrapping up the series after five seasons, Ryan Phillippe’s Julian Assange-like character, potential consequences for Patty’s machinations, and—MAJOR SPOILER ALERT, if you have yet to watch the season opener—the apparent murder of Byrne’s Ellen Parsons, shown in a pool of blood after plummeting off of a building.

In approaching the final season of the show, did you look at the full series as a five-act play, and what does Season 5 represent in broad terms?

Daniel Zelman: From the very beginning, we talked about the show being five seasons and we always knew it was going to end with Ellen and Patty going up against each other in a case. [In Season 1], we started seeing the first few minutes of Ellen’s birth into the professional world. In the second season, it’s like her rebellious adolescence. The third season is when she becomes an adult and goes off on her own; she works at the DA’s office. The fourth season is about her realizing that she can’t fully become the adult she wants to be until she separates herself from Patty, and then the fifth season is the final act of that separation and her actually trying to conquer Patty and move past her. So, from the beginning, that was an arc that we had in mind. There’s the case every season and all of that, but the center of the show has always been Ellen and Patty and their relationship, so that was always the spine of the series.