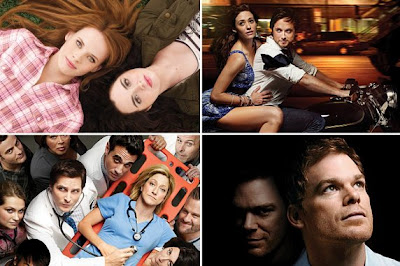 Is anyone watching Mad Men live?

At The Daily Beast, you can read my latest feature, "TiVo’s 20 Most Time Shifted TV Shows of 2011-12: Mad Men, Fringe, and More," in which I examine TiVo's Top 20 TV shows with the highest percentage of time-shifting, from Showtime's Nurse Jackie and AMC's Mad Men to Fox's Fringe and ABC Family's Switched at Birth.

TiVo singlehandedly changed the way that many viewers watch television, allowing consumers to record their favorite shows and time-shift their viewing altogether.

Increasingly, time-shifted viewing is having an enormous impact on television ratings, and the networks have begun to consider the uptick in DVR-viewing when calculating their overall ratings. According to the data provided by TiVo to The Daily Beast, the shows with the highest aggregated rating of time-shifted viewing during the 2011–12 season are the usual suspects: Modern Family, The Big Bang Theory, Glee, and NCIS, to name a few. In other words: popular shows become even more popular once TiVo examines the overall time-shifted viewing. This is not a surprise.

What is interesting, however, is TiVo's data that illustrates the percentage of the total viewing of a given show that was time-shifted. (TiVo calls this measurement "Percentage Time-Shifted Viewing.") For instance: Showtime’s dark comedy Nurse Jackie has the highest percentage of time-shifted viewing out of any primetime show on television. Shows as varied as Mad Men, Fringe, and Switched at Birth are also on the list. (Community, meanwhile, ranks at No. 164, just behind An Idiot Abroad and Survivor.)

A few caveats before we dive in: The data provided comes from TiVo’s Stop||Watch ratings service, which “passively and anonymously” collects DVR viewing data from a sample group of 350,000 nationally distributed TiVo DVR subscribers. (That sample group represents roughly 17.5 percent of TiVo’s overall subscriber base of approximately 2 million customers.) Additionally, TiVo considers any viewing that takes place five seconds after the live broadcast as being “time-shifted.” As for the Percentage Time-Shifted Viewing figures we’re looking at: higher percentage time-shifted scores indicates preference on the part of viewers to watch the specific show time-shifted than live, independent of the overall popularity of the show.