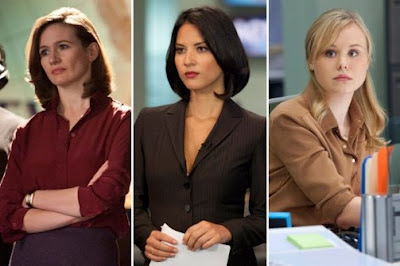 HBO's The Newsroom transforms its female characters into hysterics and fools. In a critics’ conversation, Maureen Ryan and I dissect the woman problem embedded in Aaron Sorkin’s troubling drama.

Over at The Daily Beast, you can read my latest feature, "HBO’s The Newsroom: Aaron Sorkin’s Woman Problem," a critics' conversation in which The Huffington Post's Maureen Ryan and I explore the women problem within The Newsroom.

In certain circles, HBO’s latest drama, The Newsroom, from creator Aaron Sorkin (The West Wing, The Social Network), has been the galvanizing event of the summer, eliciting no shortage of strong responses both pro and con. In a critics’ conversation reprinted below, The Daily Beast’s Jace Lacob and the Huffington Post’s Maureen Ryan delve into the troubling issue of women within the HBO drama.

MAUREEN RYAN: One of the bigger problems with The Newsroom is that so many scenes involve men setting women straight, men supervising women, a man teaching a woman how to use email (and the woman getting it spectacularly wrong regardless), a hapless woman seesawing between two different men, etc. It’s not that I can't buy Will McAvoy, Jeff Daniels’s lead character, as a fully realized human being, but it’s pretty clear that the show thinks he is right, admirable, or brave most, if not all, of the time.

We’re supposed to believe that MacKenzie McHale (Emily Mortimer) covered conflicts in the Middle East and won multiple awards for her work, yet she doesn’t understand how email works? She can’t get through a meeting without knocking over a poster? But one of the most troubling things is the way she’s used to prop up Will’s martyr complex: she cheated on him, and yet she clearly still adores him, despite the way he repeatedly berates her. She is the Woman Who Done the Man Wrong yet can’t quit him (really?). He’s clearly our hero, and she’s capable on occasion, but as ditzy and needy as the show needs her to be whenever it suits Sorkin.

JACE LACOB: It’s hard to know what’s more infuriating: that MacKenzie is written as though she hasn’t even heard of a war zone or that she’s presented as alternately hysterical and incompetent. Her email gaffe in the second episode is unbelievable and galling. If you’re thinking, well, who hasn’t sent an errant email? Why does it have to be some symbol of misogyny? Then picture a male character in Sorkin’s world who doesn’t know the difference between the “*” and “s” keys on his BlackBerry. Impossible.

The pratfalls hardly help solidify her character, nor does the near-constant yelling that Mortimer’s MacKenzie indulges in. She’s strident in a way that Sorkin refuses to let McAvoy be. Where he’s ambitious and visionary, she’s shrill. In fact, The Newsroom seems to relish putting loud women in their place or to render them helpless and histrionic. If the message of News Night is “we can do better,” surely that can apply to Sorkin as well here?

Anonymous said…
I think Sorkin did a wonderful job of portraying woman in today's workforce.In my experience they need their hand held a little bit to show what's right from wrong.It's refreshing to see such true accuracy in the depiction of today's woman.
7/02/2012