The Daily Beast: "2012 Emmy Awards: Our Predictions for Who Will Win" 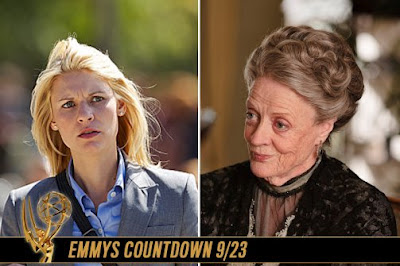 Will Breaking Bad unseat Mad Men? Will Maggie Smith be crowned a winner? Ahead of Sunday’s Primetime Emmy Awards telecast, Maria Elena Fernandez and I predict the outcomes of the top races.

Over at The Daily Beast, you can read my latest feature, "2012 Emmy Awards: Our Predictions for Who Will Win," in which Maria Elena Fernandez and I offer our predictions in ten of the key races in Sunday's Primetime Emmy Awards. Will Mad Men remain triumphant? Will Downton Abbey's Dowager Countess reign supreme? Let's take a look

The Emmy Awards aren’t typically known for shocking anyone, but there are some unexpected twists every now and then. Just look at last year’s surprise Best Actor win for Kyle Chandler for the beloved, barely watched Friday Night Lights, and the look of absolute shock upon the face of Best Supporting Actress winner Margo Martindale.

This year’s races are tighter than ever, especially in the acting categories, where no fewer than seven comedians are battling it out for supremacy in the Best Actress race, and the competition is no less fierce in the supporting categories, where Breaking Bad’s Anna Gunn will face off against The Good Wife’s Christine Baranski and Archie Panjabi, Mad Men’s Christina Hendricks, and Downton Abbey’s Maggie Smith and Joanne Froggatt.

The winners will be announced on Sunday’s telecast of the 64th Annual Primetime Emmy Awards on ABC. But before they’re declared, Jace Lacob and Maria Elena Fernandez offer their predictions of who and what will take home the top prizes in 10 key Emmy races.

He Said: This year represents some very real competition to the supremacy of four-time winner Mad Men, but despite the presence of potential spoiler Downton Abbey (the Television Academy loves a cultural lynchpin!), political thriller Homeland, and meth-laced Breaking Bad (and for reasons I discuss at long length here), I think Mad Men will once again emerge victorious, making Emmys history with a fifth win for Best Drama.

She Said: AMC will have lots to brag about, but it won’t be Mad Men making them proud. It’s all about Breaking Bad this year. The show’s fourth season was an unforgettable blast and its strong fifth season (however short it was!) makes it fresh in all of our memories. One of the best shows in the history of television needs to be recognized and this is the year. Walter White did not kill Gus Fring for nothing.