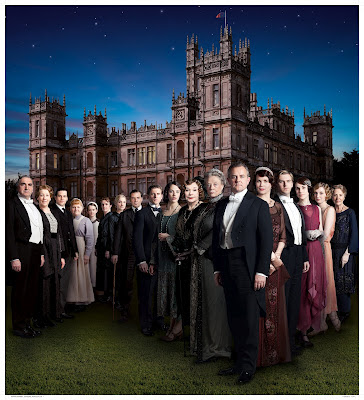 Desperate for Downton Abbey ahead of its return? You've come to the right place.

"Inside Downton Abbey Season Three," in which I sit down with Downton Abbey creator Julian Fellowes, executive producer Gareth Neame, and members of the show’s sprawling cast—including Hugh Bonneville, Elizabeth McGovern, Michelle Dockery, Joanne Froggatt, and Brendan Coyle—to discuss what’s coming up on Season 3 (which launches on Sunday in the U.K. and January in the U.S.), including star-crossed romances, financial drama, the arrival of Shirley MacLaine, and much more. (Read Part 1 of this interview, in which Fellowes & Co. discuss the show’s 16 Emmy nominations and Season 2, here.)

Downton Abbey viewers are anxiously awaiting Season 3 of the addictive British costume drama—which arrives on U.K. television on Sunday (although not until Jan. 6 in the U.S., when it returns to PBS’ Masterpiece)—searching for televised methadone to tide them over until Downton Abbey’s third season kicks off.

“Cora is, in a way, less afraid of change than Robert,” he continued. “She’s come from a different tradition. Her father was an American self-made businessman. She’s not an American aristocrat, so she has a totally different feeling about all this ... As far as she’s concerned, she doesn’t care if things are going to have to change. You’ve got all those different tensions because the security of the pre-war world has gone.”

According to Hugh Bonneville, the mood has changed in the third season, following both the war and the Spanish flu, both of which claimed the lives of some of the show’s characters.

“It’s still a period of mourning,” Bonneville said. “There’s a sense of Downton re-finding its feet and perhaps trying to keep the focus back on the family and keeping the outside world at bay. They’re trying to re-bond as a family, both upstairs and down.” [MUCH MORE TO COME...]