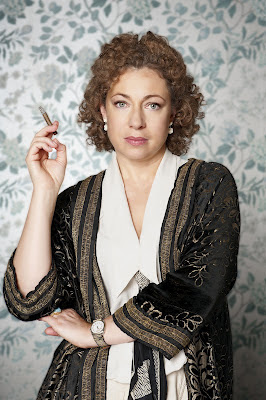 Alex Kingston reprises her role as River Song in Saturday’s Doctor Who and travels back in time for the new season of Upstairs Downstairs. I talk to the former ER star about River, Downton Abbey, historical lesbians, and more.

Over at The Daily Beast, you can read my latest feature, "Alex Kingston's Journey Through Time," in which I talk to Kingston about Doctor Who and "The Angels Take Manhattan," Upstairs Downstairs (which returns to PBS' Masterpiece on Oct. 7), Downton Abbey, River Song, historical lesbians, and more.

The costume drama’s legendary original run—between 1971 and 1975 on ITV—kept the characters’ sexuality more or less off-screen, but the recent BBC revival series, which returns to PBS’ Masterpiece on Oct. 7, has taken a more overt approach to human sexuality than its predecessor, with one character—Claire Foy’s Lady Persephone—painted as a notorious Nazi sympathizer and professional party girl who hops into bed with just about anyone.

Season 2 of Upstairs Downstairs introduces a lesbian to the staid 165 Eaton Place of 1936 in the form of Alex Kingston’s Dr. Blanche Mottershead, an archaeologist and resolutely modern woman whose romantic past is tinged with bittersweet loss. When her former lover, Lady Portia Alresford (Emilia Fox), now married with children, writes a steamy roman a clef about their time together, Kingston’s Blanche is exposed and 165 Eaton Place is once again plunged into scandal.

“She will shake up the equilibrium in the house a little bit,” Kingston told The Daily Beast. “And by the end of the series, she has done just that.”

For Kingston—who starred on medical drama ER for seven years and who reprises her recurring role on Doctor Who this Saturday—it was Blanche’s sexuality that lured her to the project.

“That more than anything hooked me because I thought it would be quite interesting to play,” said Kingston, 49. “In a curious way, it was almost easier for women to be physical with other women then, because men and society didn’t take it seriously ... It was thought of as a little dalliance that didn’t mean anything. It wasn’t exactly a threat to the patriarchy and to the world that men had created ... or as much as a societal threat that it became later, actually.”

The series doesn’t shy away from depicting the romance between the two women, showing them embracing and in bed together, as well as in several sexually charged scenes. (It led the Daily Mail to write, as a headline, “Pass the smelling salts, Hudson! The lesbian bedroom scenes that would NEVER have appeared in the original Upstairs Downstairs.”) Kingston’s Blanche is positioned as a whiskey-drinking free thinker whose career choice—looking at the relics of the past—is juxtaposed with her view toward the future. It’s no accident that she appears in the series just as the world teeters on the brink of World War II.

“The Second World War radically changed how society live, what family meant, and what women’s roles were,” Kingston said. “Blanche is right on the cusp of all of that. She had created a career for herself, as an archaeologist sought out by the British Museum for her expertise ... in comparison to Lady Agnes [Keeley Hawes], who really didn’t know who she was or what her function was, other than looking rather beautiful in the house and producing babies for her husband. Blanche is not prepared to be that woman.”