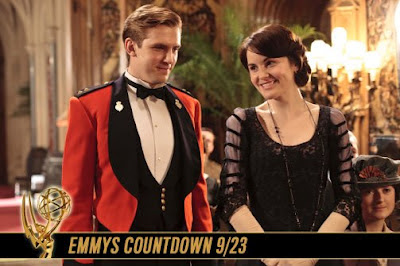 Can Downton Abbey topple Mad Men at the Emmys later this month? Jace Lacob talks to creator Julian Fellowes, as well as actors Hugh Bonneville, Brendan Coyle, Michelle Dockery, and others about Season Two, WWI, and the show’s 16 Emmy nominations. (Come back tomorrow for Part Two, in which the Fellowes and the cast discuss details about Season 3 of Downton Abbey, which launches on Sunday in the U.K.)

At The Daily Beast, you can read my latest feature, "Abbey's Road: Downton Abbey's Emmy Bid," in which I sit down with Downton Abbey creator Julian Fellowes, executive producer Gareth Neame, and the cast (including Hugh Bonneville, Brendan Coyle, Michelle Dockery, Joanne Froggatt, and others) to discuss the British costume drama's road to the Emmys, Season Two, and more.

It’s hardly a surprise that the Television Academy would shower some love upon PBS’ Downton Abbey. After all, the Julian Fellowes–created drama—which airs in the U.S. on the 41-year-old anthology series Masterpiece—walked away with the Emmy Award for Best Miniseries last year, and scored a staggering cumulative audience of 17 million viewers for its second season. And Downton is now competing for a Best Drama award, ahead of the launch of its third season this weekend in the U.K.

The British soap will battle for the top prize with such critics’ darlings as Mad Men, Breaking Bad, Homeland, Boardwalk Empire, and Game of Thrones, all of which hail from cable networks HBO, Showtime, and AMC. But, in a year when not a single broadcast network drama is being represented, Downton’s 16 nominations and its departure from the movies and miniseries category and into the fiercely contested Best Drama race is even more of a feat.

“We were going up against the giants of American television,” creator Julian Fellowes told The Daily Beast. “We were hoping for a look-in and we got 16.”

Fellowes wasn’t alone in that sense of surprise. “It is a big leap to go from being a ‘new boy’ to being in the mainframe,” said Hugh Bonneville, who plays the estate’s Earl, Lord Robert Grantham, and who scored a Best Actor nomination. “To be thought of in the same breath as people like Steve Buscemi and Damian Lewis is just mind-blowing, really.”
Bonneville wasn’t the only member of the show’s sprawling cast to receive a nod, with nominations also secured for Michelle Dockery, Jim Carter, Joanne Froggatt, Brendan Coyle, and Dame Maggie Smith. “It’s the complete antithesis of the usual ‘body of work’ thing that people get a noise for,” said executive producer Gareth Neame. “It can only be that the Academy members love those characters and really respect the actors that play those parts.”

For Masterpiece executive producer Rebecca Eaton, the show’s mainstream success has turned up the volume of the buzz surrounding Downton Abbey to deafening levels. “It keeps exceeding expectations,” she said. “I’m trying to stay calm and carry on.”