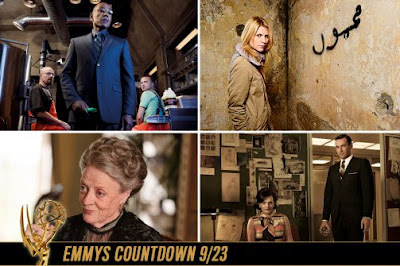 The race for the Emmy Awards’ top drama prize is fierce (hello, Downton!).

Over at The Daily Beast, you can read my latest feature, "Best Drama Race: Will Mad Men Make History?" in which I assess the field to see whether Mad Men will make history with a fifth win.

Can Mad Men could do the impossible on Sunday and win a fifth Emmy Award for Best Drama? After walking away with the statuette four years in a row, all eyes are on AMC’s Emmy darling, which could make history with a five-time win.

Currently, Mad Men shares the record for most Best Drama wins with such notable programs as Hill Street Blues, The West Wing, and L.A. Law, all of which were crowned victors four times. But a win at Sunday’s 64th Annual Primetime Emmy Awards would make Mad Men the undisputed drama record-holder, no small feat for a show that is about to go into its sixth season—reportedly the show’s penultimate—and whose loyal viewers are considerably dwarfed by HBO’s and Showtime’s entries.

Mad Men’s fifth season found Don Draper (Jon Hamm) rediscovering himself as a newlywed after his surprising proposal to his secretary, Megan (Jessica Paré); Pete Campbell (Vincent Kartheiser) facing his mortality; Joan Harris (Christina Hendricks) selling herself to become a partner; Peggy Olsen (Elisabeth Moss) leaving the firm; and poor Lane Pryce (Jared Harris) taking his own life in the office. Often polarizing, Season 5 of Mad Men was a challenging and gut-wrenching season of transformation for its characters, and a lyrical and haunting experience for many viewers.

It’s Mad Men’s toughest road to the Emmys podium. This year’s competition is fierce; so fierce, it seems, that there isn’t a single broadcast network drama competing for the top prize. (Stalwart CBS drama The Good Wife is the most obvious omission.) Instead, Mad Men’s competitors come almost entirely from cable, with AMC sibling Breaking Bad, HBO’s Game of Thrones and Boardwalk Empire, and Showtime’s Homeland all represented.

And then there’s Downton Abbey, the British costume drama that transformed itself into a phenomenon this year. The Julian Fellowes–created show—which depicts the lives of the wealthy Crawley family and their servants in the post-Edwardian era—airs on PBS’s venerable Masterpiece, the 41-year-old anthology series that has suddenly become a mainstream success story thanks to its wise and prescient investment in Downton.