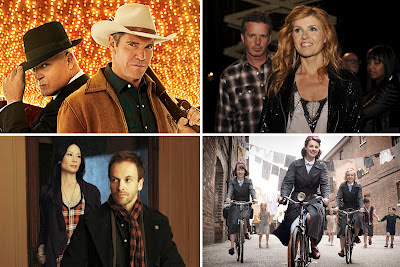 The fall television season is here! But which shows should you be watching and which should you skip? I'm glad you asked.

Over at The Daily Beast, you can read my latest feature, "Fall TV 2012 Preview: 7 Shows to Watch, 7 Shows to Skip," in which I offer my take on the upcoming fall season, with seven shows you should be watching (from ABC's Nashville to PBS' Call the Midwife) and those you should be snubbing (Partners, The Neighbors).

The fall television season is once again upon us, and overall the results are pretty depressing: there’s a decided lack of originality to much of the broadcast networks’ new offerings, as if they were somehow injured by the lack of interest in last year’s riskier programs.

In fact, there is a whole lot of formulaic fare coming to your televisions, and a ton of new (mostly awful) comedies this year. But fret not: it’s not all doom and gloom, as there are at least a few promising new shows on the horizon, from the Connie Britton-led country music drama Nashville to the sweet charms of offbeat comedy Ben & Kate.

Once again, the broadcasters have opted to hold back many of the more interesting new shows until midseason, which means we’ll have to wait until January for the launch of Kevin Williamson’s serial killer thriller The Following against James Purefoy in a murderous game, and Bryan Fuller’s television adaptation of Hannibal, which finds a young FBI agent (Hugh Dancy) meeting the cannibalistic psychopath Dr. Hannibal Lecter (Mads Mikkelsen) for the first time. Which isn’t to say that midseason is entirely promising either: the winter will also find ABC offering us the truly terrible Dane Cook comedy (and I use that word loosely), Next Caller.

In the meantime, however, while we’re waiting for the rise of the serial killers on the broadcast nets, here’s a look at the best and worst of the new fall television season.