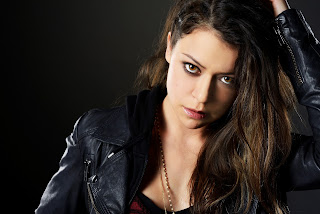 If you didn’t watch BBC America’s clone drama Orphan Black, you missed one of the year’s best dramatic performances. My take on why Tatiana Maslany deserves an Emmy nod.

Over at The Daily Beast, you can read my latest feature, "Emmy Awards’ Dark Horse Nominee," in which I offer a look at one of the year's best television performances, that of Tatiana Maslany on BBC America's Orphan Black, and state why this dark horse deserves at least an Emmy nomination.

If you don’t regularly tune in to shows about global conspiracies, illegal medical research, and genetically identical clones, you may be forgiven for not watching Orphan Black, the serpentine Canadian-American science fiction drama that wrapped up its first season earlier this month on BBC America. (Season 2 will air in 2014.)

But not watching this compelling and surprisingly emotional cult drama—created by Graeme Manson and John Fawcett—means that you missed out on one of the year’s most intense and astonishing television performances. In Orphan Black, Tatiana Maslany delivers a daredevil turn, playing no less than seven different roles, each one with their own mannerisms and secrets.

It’s no surprise that Maslany, a 27-year-old Canadian actress, has already been racking up accolades for her electrifying acting. On Monday, she was awarded the Critics’ Choice Television Award for Best Lead Actress in a Drama Series and, on the same day, nominated for a Television Critics Association Award for Individual Achievement in Drama. While roughly two weeks remain before Emmy nomination ballots are due back from voting members, Maslany is already receiving buzz as a dark horse contender for a Best Actress spot. And with good reason, as Maslany’s versatile performance in Orphan Black would be a staggering feat for a veteran actor, much less for one recently starting out.

Maslany plays Sarah Manning, a sharp-tongued British grifter who sees an escape from her problems when a woman—one who looks identical to her—jumps in front of a moving subway train. Desperate to escape her abusive drug dealer boyfriend Vic (Michael Mando) and reclaim her young daughter, Sarah assumes the identity of her lookalike, slipping into her life in order to start a new one. But the dead woman—Beth Childs—is a cop under investigation for the shooting death of a civilian, and by assuming her identity, Sarah is drawn into a conspiracy that reveals her own true nature: that she and Beth are clones, closely monitored by their creators, and that someone is trying to kill them off. (The result is something akin to Ringer crossed with Krzysztof Kieslowski’s La double vie de Véronique with some Alias thrown in for good measure.)