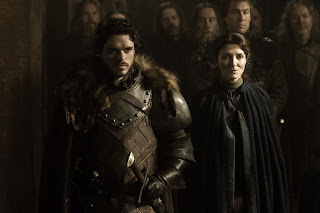 Yes, that actually did just happen. My take on the latest shocking twist on HBO’s Game of Thrones, and why the disturbing outcome of the Red Wedding was crucial for the series. Spoilers abound!

At The Daily Beast, you can read my latest feature, "The Red Wedding: HBO’s Game of Thrones Reveals Its Latest Twist," in which I offer my take on this week's shocking episode of Game of Thrones ("The Rains of Castamere") and why the twist was necessary for the longevity and narrative stakes of the series.

And they partook of his salt and bread.

Oaths are meant to be sacred: after all, a man is only as good as his word. But a world in which oaths are meaningless and void is a terrifying place without logic, justice, or order. On this week’s episode of HBO’s Game of Thrones (“The Rains of Castamere”), we see the ramifications of breaking one’s word. Just as Robb Stark (Richard Madden) betrayed his vow to Walder Frey (David Bradley), promising to marry his daughter in exchange for Frey bannermen, so too does Walder Frey betray the most sacred oath of all, that of hospitality.

This week’s gut-wrenching episode hammered home the dramatic stakes at play within HBO’s Game of Thrones, one that perfectly captures the bloodshed of George R.R. Martin’s A Song of Ice and Fire novels and their underlying notion that no one is ever truly safe. That goes for kings and queens, mothers and children, the old and the unborn.

In a series that’s already rife with whiplash-inducing plot twists, the Red Wedding is one of the most unsettling, horrific, and terrifying moments, not least because it lulls the audience into a false sense of safety. By eating Walder Frey’s bread and salt, the Starks engage in the age-old custom of hospitality. To betray one’s guests in one’s home is a most grievous sin, yet that’s just what Walder Frey does to enact a most terrible vengeance against the King in the North and his clan, murdering Robb, Catelyn (Michelle Fairley), and their men at the wedding feast, transforming this bawdy celebration into a bloodbath from which no one escapes.