The Daily Beast: "Game of Thrones: Will the HBO Series Catch Up to George R.R. Martin's Books?" 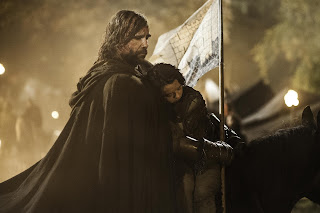 Game of Thrones may catch up with George R.R. Martin's A Song of Ice and Fire novels. So what will HBO do if the inevitable does occur? My take on the show's options.

At The Daily Beast, you can read my latest post, "Game of Thrones: Will the HBO Series Catch Up to George R.R. Martin's Books?" in which I react to Entertainment Weekly's story on whether Game of Thrones will meet up with (or surpass) the progress of Martin's in-progress novels.

After the horror and shock of last week's Red Wedding episode, Season 3 of Game of Thrones ended rather quietly.

There were no dragons being born from ancient eggs placed upon a funeral pyre, nor white walkers marching en masse for the brothers of the Night's Watch. Instead, Daenerys Stormborn (Emilia Clarke) is raised above the shoulders of the slaves she freed from bondage and the episode ("Mhysa") more or less set up some new conflicts and story for the fourth season, which should arrive sometime in 2014.

Putting that aside, however, is a more pressing concern about the shape of this massive narrative, particularly as showrunners David Benioff and D.B. Weiss are dealing with "a ticking clock" in the form of the show catching up with George R.R. Martin's A Song of Ice and Fire novels. Martin is hard at work at the series' sixth book, entitled The Winds of Winter, but there is every indication that the HBO fantasy drama's narrative could either catch up to Martin or surpass him altogether.

This trepidation is something that has been keenly felt by the novel series' readers since HBO's Game of Thrones began in 2011: what happens when the television show gets ahead of the novels that it's adapting? It's a fear that HBO seemed to shrug off, perhaps thinking that they'd deal with that situation when they had to. Unfortunately, that time is soon.
HBO programming president Michael Lombardo has finally acknowledged that it's a valid concern. "I finally understand fans' fear—which I didn't a couple years ago: What if the storytelling catches up to the books?" he told Entertainment Weekly. "Let's all hope and pray that's not going to be a problem."