The Daily Beast: "Mad Men: Who Is Bob Benson?" 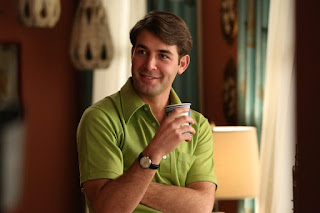 The truth of who Bob Benson is was finally revealed on Sunday’s episode of Mad Men. My take on the revelation and how it connects to Don Draper. Warning: spoilers ahead!

At The Daily Beast, you can read my latest feature, "Mad Men: Who Is Bob Benson?" in which I offer my take on this week's episode of AMC's Mad Men and what the true identity of Bob Benson (James Wolk) means for the show and Don Draper.

“I used to wonder how you were so expertly servile.”

On Mad Men, James Wolk’s eager-to-please ad man Bob Benson—a sort of golden retriever in an impeccably preppy suit who was always ready with an extra cup of coffee or a deli platter for a funeral—offered one of the season’s most hotly discussed mysteries, second only to whether Jessica Paré’s Megan Draper would be murdered. Theories were rampant. Was the perpetually chipper up-and-comer, who inexplicably seemed to materialize at SCDP (later renamed SC&P), a spy from a rival agency, an undercover reporter, Don’s love child, or a government agent?

Last week’s episode, “Favors,” seemed to indicate that Bob was gay, as he appeared to make an advance at Pete Campbell (Vincent Kartheiser) by gently touching his boss’s leg with his own and seemingly making a declaration of his love. When I asked Mad Men creator Matthew Weiner at the Academy of Television Arts and Sciences panel I moderated last weekend whether Bob Benson was gay, he demurred, saying what passed between Bob and Pete didn’t necessarily indicate that. So, then, the question hovers in the air like smoke from one of Don’s cigarettes: just who is Bob Benson?

But Bob Benson isn’t a spy, an undercover reporter, or a G-man. (Nor is he Don Draper himself, as some have confusingly guessed.) The truth is far more mundane, in a way: Bob Benson is anyone he needs to be.

In this week’s episode of Mad Men, “The Quality of Mercy,” Bob’s secret history came tumbling out from a most unexpected source. Headhunter Duck Phillips (Mark Moses) discovered, when tasked by Pete with finding leads for Bob, that Bob’s personnel file “might as well be written in steam.” Every bit of information we’ve learned this season about Bob—the blue-blood connections, the dead father, his work experience, etc.—was a fiction cleverly created by a cunning social climber, one who wanted to leave his West Virginia roots behind and reinvent himself as a slick go-getter.