The Daily Beast: "Under the Dome Is One Eerie TV Show" 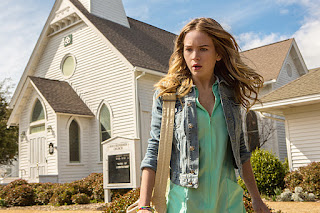 From Stephen King and Steven Spielberg comes Under the Dome, a weird, scary, and potentially great excuse to stay inside this summer. I dissect tonight’s premiere.

At The Daily Beast, you can read my latest feature, "Under the Dome Is One Eerie TV Show," in which I review CBS's eerie new drama Under the Dome, based on Stephen King's 2009 novel of the same name, which begins tonight at 10 p.m. ET/PT.

In the not-too-distant future, the inhabitants of Chester’s Mill—a small and seemingly idyllic town in Anywhere, U.S.A.—suddenly discover their town is trapped inside an invisible barrier of unknown origin. Birds fall from the sky, numerous vehicles crash, and a blood-red handprint on this transparent dome becomes a sigil of awe and fear.

This is the basis for CBS’s intriguing new “event” drama series, Under the Dome, which begins its 13-episode summer run tonight at 10 p.m. (While some have referred to it as a “miniseries,” it is most definitely an ongoing series, with the strong possibility of future seasons should ratings take off.) Based on Stephen King’s 2009 novel of the same name, Under the Dome imagines a scenario that is both rife with possibility and nightmare. Trapped and with nowhere to turn, Chester Mill’s residents must either work together to survive or succumb to the terror and uncertainty of their new situation, one that has cut them off from both loved ones and the outside world. So, live together, die alone then?

If that reminds you of the now-famous words uttered by reluctant leader Jack Shephard (Matthew Fox) on Lost, you’re on the right track. Under the aegis of executive producers Steven Spielberg, Neal Baer (Law & Order: Special Victims Unit, ER, and far too many other credits to list here), and Brian K. Vaughan (Lost), the series imagines a terrifying “what if” scenario that positions the inexplicable as a backdrop for the intimate.

Much like Lost before it, Under the Dome presents a life-altering occurrence as a crucible by which to view a group of disparate characters. Barbie (Mike Vogel), a former soldier, is passing through Chester’s Mill on some illicit business when he’s trapped inside. Local newspaper editor Julia Shumway (Rachelle Lefevre) has a nose for news but seems oblivious to what’s going on inside her own home. Angie (Britt Robertson) is a local nurse who is desperate to escape Chester’s Mill even before the dome, but finds herself trapped inside with her emotionally unstable boyfriend, Junior (Alexander Koch). Local bigwig Jim Rennie (Dean Norris), a used-car salesman and councilman, looks to use the dome to seize control of the town. A lesbian couple from Los Angeles, Carolyn (Aisha Hinds) and Alice (Samantha Mathis), taking their troubled daughter (Mackenzie Lintz) to a “camp,” find themselves stuck as well.

Elsewhere, there are a pair of local radio DJs (Nicholas Strong and Joelen Purdy), the stoic town sheriff (Lost’s Jeff Fahey) and his trusted deputy, Linda (Natalie Martinez), and a subplot that indicates that the financial stability of the town may be based on less-than-legal solutions. It’s this latter element that is perhaps the most timely, given the recent economic downturn and its similar handling over on A&E’s Bates Motel: how does Small Town America remain viable? How creative do towns like Chester’s Mill have to be in order to survive in the 21st century?