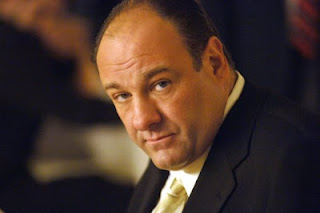 James Gandolfini, the hulking star of HBO's acclaimed The Sopranos, has died. My piece on the legacy the actor and producer leaves behind.

At The Daily Beast, you can read my latest feature, "James Gandolfini the Great," my appreciation of the late, great Sopranos star James Gandolfini, who passed away yesterday at age 51 while traveling in Italy.

HBO has confirmed the unexpected death of actor and producer James Gandolfini, who passed away at age 51 while traveling in Italy. At press time, the cause of his death was unclear, with several outlets reporting a heart attack or a "sudden stroke." He was due to appear at the Taormina Film Festival in Sicily, where he was slated to paricipate in a panel discussion with director Gabriele Muccino.

While Gandolfini appeared in countless film and television roles, ranging from comedies (like Armando Iannucci's wickedly skewering Washington satire In the Loop) to hard-hitting dramas like Kathryn Bigelow's Zero Dark Thirty, it was his visceral turn as deeply troubled mobster Tony Soprano, the pater familias of a New Jersey crime family and a domestic one, on HBO's The Sopranos, which won him accolades from critics and viewers alike. During the drama's acclaimed six-season run, Gandolfini would win three Emmy awards for Best Actor for The Sopranos (he was nominated six times), widely regarded as one of the best television shows ever to air—it was recently named the best written show in history by the Writers Guild of America—and one that ushered in a new Golden Age for television.

"We're all in shock and feeling immeasurable sadness at the loss of a beloved member of our family," said HBO in a prepared statement. "He was a special man, a great talent, but more importantly a gentle and loving person who treated everyone no matter their title or position with equal respect. He touched so many of us over the years with his humor, his warmth, and his humility. Our hearts go out to his wife and children during this terrible time. He will be deeply missed by all of us."

With his death, Hollywood has lost one of its finest veteran actors. With The Sopranos, Gandolfini delivered a searing and deeply complex performance that captured the rage, sorrow, and frustation of the modern American male. As played by Gandolfini, Tony Soprano was full of contradictions, a complex man whose struggles with depression and panic attacks humanized him despite the violence he perpetrated on those around him. (It was hard not to love him when even his desperate, harried mother wanted him dead.) Prone to violence, Tony Soprano represented the unfettered darker impulses of the id, while also remaining intriguingly relatable. Even as the character plotted for control of a New Jersey criminal enterprise, he struggled to keep his own family together.