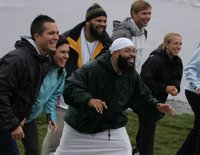 And they’re off! The 10th season of The Amazing Race started out with a bang last night as twelve teams raced from drizzly Seattle to bustling Beijing.

Starting out strong were Peter and Sarah, a recently dating couple from California. Peter seemed a little tightly wound, barking orders at his partner during a brick-laying challenge. But Sarah, a triathlete with a prosthetic leg, was truly an impressive competitor. The team stayed at the front of the pack for most of the race until reaching the Great Wall of China where they took a wrong turn and unnecessarily climbed up hundreds of steps. Realizing their mistake, Sarah and Peter had to go back down again and then scale a wall to the first pit stop – a task that was particularly difficult for Sarah as her prosthetic leg made it almost impossible to use the rope loops for support.

Not as impressive were Rob and Kimberly who took the early lead for “Most Annoying Couple” this season. Their constant squabbling is already wearing thin. And yet I did not find them to be the most cringe-worthy team. That title would have to go to cheerleaders Kellie and Jamie. As co-captains of the University of South Carolina Gamecocks (yes, Gamecocks) cheerleading squad, they assessed every situation in a cheerleading context, using terms like “balance” while bouncing up and down and clapping incessantly. They’re just so perky you want to smother them with a pillow.

Other teams of note included Duke and Lauren, a father and daughter from Rhode Island. In the personal interviews, Duke admitted that he was “disappointed” in his daughter because she is a lesbian. Ouch. And yet, in spite of the friction between them, they finished second. First to the mat were Tyler and James who share the dubious title of “Models/Recovering Addicts” which has to be one of the more interesting monikers on the Amazing Race thus far. And, at the back of the pack were David and Mary, a coalminer and his wife from Kentucky. They did surprisingly well, slipping to last place only towards the end of the race in Beijing where Mary related their experience in China to a “thirty year old baby” being dropped into the world.

I would like to have seen more of Bilal and Sa’eed, Muslim best friends from Ohio. The two men of big stature and big attitudes were booted from the game early on in a surprise twist. It looks like this season teams will be susceptible to Phil’s wrath not only at the pit stop but at the end of certain challenges too. While not the most original idea, I’m hoping that this will help break up the traditional Race format, which has become a little predictable. But I was particularly saddened by the elimination of married couple Vipul and Arti who seemed to have one of the healthiest relationships ever seen on the Race. Arti was genuinely sweet and both she and Vipul were very encouraging to one another and, although they weren’t the most competitive team out there, I think their presence would have added something to the show.

Luckily, the appearance of all-star host Phil, looking dapper with his particularly spiky hair and red linen shirt, cheered me up. He is a shining beacon in even the darkest times of the Race (Family Teams, anyone?) and I look forward to spending several more hours with him and the contestants of Season Ten.

Next week on The Amazing Race: the teams get “plowed” during an oxen cart challenge.

Televisionary temp operative "Christine Fortune" works on one of television's most popular comedy series and is filling in for Jace while he is off hobnobbing with London's television elite. Jace is set to return tomorrow.

It might be sacrilege to say it, but I wasn't all that thrilled by the Studio 60 pilot when I saw it back in May, but I'll give it another shot tonight. What can I say? I'm in a giving mood today.

Season Two of Showtime's suburban-set pot dramedy is in full swing. On tonight's episode ("Crush Girl Love Panic"), Nancy and Conrad survey the damage from last week's DEA raids in the neighborhood but discover that their grow house has been spared; Celia is kicked off the set of Isabelly's Huskaroo commercial. Heh, stage moms...

On the season finale of the semi-improvised comedy ("The Fire"), Victoria (Jane Lynch) faces off with her nemesis Nancy (guest star Camryn Manheim). Let me guess, does it involve, say, fire?

Anonymous said…
I have to say, I wasn't particularly thrilled about the "twist." Then I looked again at the picture you posted and was even more saddened. The muslims look particularly excited to be starting this adventure, and I am not sure the twist added anything to the game. Seems like a Survivor move. Also, it was even sadder since by all accounts it seemed it should have been Edwin and Godwin that got the boot at the twist, since they seemed to be behind the whole time. And they kind of bug me.

You didn't mention the single moms. I kinda love them. I didn't mind the cheerleaders, honestly. they were competitive enough. Dad/daughter will be interesting to watch.

What's nice is that so far there is no one I outright hate, though that one annoying couple could be the Jonathan and Victoria of the season.
9/20/2006

Jace Lacob said…
Great write up, "Christine Fortune." You almost make me wish that I went away on business trips more often so you could fill in for me.

Re: the twist, I am sort of torn. On the one hand, it is a sort of "Survivor" move that could erode the show a little bit if it gets too gimmicky. On the other hand, however, it definitely raises the stakes and makes each leg of the Race a lot more unpredictable. If you never know when you're going to be eliminated, you have to strive that much harder to keep in the race and not fall behind. Plus, it eliminates that frustrating element of the "equalizers" along the way... you can't depend on them anymore, as you might arrive at a roadblock or detour only to find you're no longer even in the race.

I was sad to see the Indian couple go as I really, really liked them. And it was all down to a bum taxi driver... as is so often the case on Amazing Race.
9/20/2006