Bidding Adieu to the Dubba-Dubba-WB 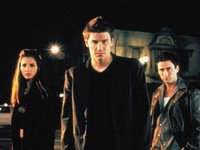 It's with a heavy heart that I'll sit down on Sunday night and watch the WB sign off. It seems like only yesterday (eleven years ago, in fact) that the little netlet-that-could launched and brought an (in)attentive audience shows like Muscle and Unhappily Ever After. For me, the WB truly launched back in 1997 when it started airing seminal series like Buffy the Vampire Slayer and Dawson's Creek, two programs that more than any others put the fledgling network on the map for audiences and critics alike.

On Sunday night, the WB will take its final bow before rising like a phoenix from the ashes of What I Like About You to become the CW, another unfortunately monikered netlet comprised of the old CW and UPN, who are coming together to battle the evil forces of more dominant networks together. It's either a canny mix or a big old mess. Throw in some vegetables from craft services, as Carl Weathers might say, and you've got yourself a stew going.

But before Veronica meets the Gilmore Girls and Tyra takes on those annoying kids on One Tree Hill , the WB is giving you one last chance to relive its glory days by airing the pilot episodes of such long-gone favorites as Felicity, Angel , Buffy, and Dawson's Creek in one easy-to-digest programming block this Sunday.

Scarily, I can remember where I was when the WB launched each of these series. I can remember way back as a sophomore at university when Buffy Summers and Co. showed up on the scene and I'll admit to being a little suspicious about a television series that was based on the film Buffy the Vampire Slayer by some guy named Joss Whedon. But I soon fell under Buffy's spell, never to recover. (Well, I sort of recovered in Season Six when things went off the rails a bit, but I digress.) It was witty, it was fun, it was the best damn metaphor for the hells of high school ever created. I've got a BtVS Once More with Feeling poster framed above my television set in my living room and every time I look at it, I can't help but think of those characters and storylines that sparked my imagination, even way back when in Season One, when you can see the next seven seasons splayed before them, filled with possibility. Remember when Willow (Allyson Hannigan) was a shy, non-magical bookworm? Or when Xander (Nicholas Brendan) had funny hair and rode a skateboard? Or when Cordelia (Charisma Carpenter) was just a stuck up rich girl who had no inclination to save the world?

I was studying at Oxford when Dawson's Creek brought us a group of randy teenagers using SAT-level vocabulary in their everyday conversations and I was immediately entranced by their rapid-fire repartee and pop culture references. Would Jen (Michelle Williams) ever notice Dawson (James van der Beek)? Would Dawson ever realize that Joey (Katie Holmes) was in love with him, even after a terrible riverboat rendition of a certain Les Miserables showtune? Who would have thought then that Michelle Williams would have been nominated for an Academy Award or that Katie Holmes would have birthed a Scientology baby with Tom Cruise? (Not I, for one.)

I was just finishing up college my senior year when Felicity Porter (Keri Russell) chased Ben Covington (Scott Speedman) across the country to Manhattan, where they would both attend the UNY (standing in, of course, for NYU), and where for the next four seasons, Felicity would find herself torn between Ben and Noel (Scott Foley). And despite a certain hairstyle change in Season Two, I was hooked on this smart, sensitive show that seemed to better capture college life than any other university-set drama on television. Whether it was Felicity's "Dear Sally" audio tapes or her astute observations--or, hell, her hilarious conversations with Dean & Deluca employee Javier (Ian Gomez), confrontations with bizarro roommate Meghan (Amanda Foreman), or fights with bi-polar Julie (Amy Jo Johnson), I couldn't get enough of J.J. Abrams' whip-smart drama, back before he became a household name with Alias and Lost. Bonus points to who can remember what Smart Powder ingredient Noel was allergic to and what its effects were...

I had just moved to Manhattan to attend grad school when a certain vampire-with-a-soul left behind Sunnydale for the big city of Los Angeles on Angel. While Angel was a somewhat darker look at the underworld (both supernatural and otherwise) of LA, it quickly became a bright spot in my week. I was shocked when they killed poor Doyle off early on in the first season (and saddened when actor Glenn Quinn himself died soon thereafter), cheered when Wesley Wyndham-Price became bad-ass, and gasped when he had his throat slit after stealing Angel's baby. The series even did the impossible and made Cordelia a likeable, sympathetic character. All while Angel (David Boreanaz) fought against the dual natures inside of him and sought redemption. If Buffy was the perfect parable for adolescence, it's Angel that's the Whedonesque metaphor for the travails of adulthood: for walking the difficult path in life and striving to be a better man for it. (Being somewhat of a dark, brooding guy most of my life, I found a kindred spirit in Angel.) And now that I live in Los Angeles, I can't say that it's as hellish as the City of Angels presented here (at least I don't work at Wolfram & Hart), but I can't help but imagine which network execs might be the living dead.

So all I can say is this: so long, WB, and thanks for the memories.

If you missed this outrageous sketch comedy's third season, here's your chance to catch it again. On the final episode from the third season, Bubbles makes a last-ditch effort to steal Roman away from Desiree as they leave the spa, while unconvincing transvestite Emily Howard discovers that Florence (a.ka. Fred) is leaving town. Do us a favor, BBC America and make sure we get the Little Britain Christmas Specials soon!

It's Part One of the British espionage drama's fourth season premiere. On tonight's episode ("The Special"), the team is still reeling from Danny's death but must put their grieving on hold in order to stop a terrorist group from launching explosive attacks in London.

Anonymous said…
I will definitely be tuning in Sunday night as each of these shows holds a special place in my heart.

I relived high school drama and heart break with "Dawson" and "Buffy." I stumbled my way through college with "Felicity." And I moved to LA and fought demons and vampires along with "Angel." (Well, maybe not so much the last one except for the moving to LA part.)

These shows have been a huge part of my life. They've inspired me in my own storytelling and continue to do so even today. Joss and J.J. are my heroes!
9/15/2006

I still miss Felicity. And Buffy. And Angel. Not DC as much, cause I stopped watching, but I miss the early days.

Tom the Dog said…
Hey, give some love up to Greg Grunberg! He's mostly what kept me watching Felicity for as long as I did. His character and bizarre romance with Meghan kept me interested long after I wished Felicity would shut the hell up about both Noel AND Ben.
9/18/2006

Anonymous said…
I miss Felicity so much! That was such a touching show. Keri Russell is so beautiful and talented. Keri Russell and Scott Speedman together were the most adorable couple of all time!
9/26/2006