"Wonder If He'll Ever Know He's In The Best Selling Show": Is There "Life on Mars"? 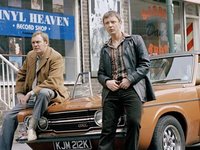 Time travel is a funny thing. Especially when the traveler in question has gone backwards in time, rather than forward. Can you change the future by altering the past? Can you save yourself?

Such questions have been plaguing Detective Sam Tyler (John Simms) for the last eight episodes of the superbly twisted British import Life on Mars. For those of you who have heretofore avoided the trippy time-travel/cop drama and weren't lucky enough to get a DVD box set from BBC America (it's already in a prized spot on my living room bookshelves), here's a quick primer on the story so far. In 2006, Sam is on the hunt for a twisted serial killer abducting young women. After his own girlfriend, a police colleague, is abducted, Sam is hit by a car in a near-fatal accident. When he wakes up, he finds himself in 1973, still assigned to the Manchester police force, on the hunt for a serial killer abducting young women... But is Sam mad? Or in a coma? Or has he traveled back in time?

It appears the answer to the above is resounding yes to all three. Poor Sam has become inextricably tangled up in his own past and in tonight's simply amazing season finale, Sam is assigned to a case that involves his own father. Will he find out what happened that caused his dad to leave him and his mum at a friend's wedding reception 30 years ago? Can he prevent history from repeating itself? And can he use this crucial moment in his past to cause his future self to wake up from his coma?

If those questions are confusing you, you've obviously not gotten hooked by this television gem. For those of you that have become obsessed with this series, I will say that tonight's episode, the eighth in the series, answers several questions while purposely leaving others tantalizingly unresolved. Just what happened in the woods and what did a four-year-old Sam see in those frustratingly brief flashbacks? What memory has Sam repressed for all of these years? Who is the woman in the red dress? (Viewers will be happy to learn that all of those questions WILL be answered and the resolution to the last plot point was very unexpected, at least to this Mars fan.)

However, I'm still dying to know about the little girl in the television (is she a figment of Sam's imagination or something far worse?), how and why Sam traveled back in time to this particular junction, and if Sam's actions in tonight's episode have changed anything in the future or if, rather, they've ensured that the future as Sam knows it has come to pass. I was a bit worried that the writers would wrap everything up at the end of the season but, don't worry, the Beeb has commissioned another batch of original episodes which means that Sam Tyler isn't leaving 1973 anytime soon. (Not if I have anything to say about it, anyway.)

The best line of the entire episode: "That's a very mixed metaphor." (One guess who utters that one.) The Gene Genie (Philip Glenister) has some astoundingly fantastic moments in this episode (complete with funky black leather driving gloves, no less) and I'm happy to report that the drool-worthy Cortina GXL is still in one piece at the end of the season. Speaking of the "end" as it were, the final 30 seconds to the season are a beautifully understated affair containing only one word, repeated five times. (And, no, I won't tell you what that word is.) It's a fitting end to what has become quite simply one of my favorite series, a mind-bending mix of police procedural, existential sci-fi, and period drama.

So, if you're wondering if there is life on Mars, the answer is a resounding yes... and I for one have been more than happy to be invited along for the ride so far.

See above. It's the season finale of this brilliant (and British) mind-bending mystery series that stars State of Play's John Simm as Detective Sam Tyler, a modern-day copper who wakes up in 1973. On tonight's episode, Sam begins to investigate crimes that implicate his own father.

Anonymous said…
I have become a HUGE fan of "Mars" and am so happy to hear that they are doing more episodes. I'm usually not a fan of police dramas but this one is clever, fabulously acted, and most of all...unique.

Sam Tyler is everyman's hero and his bad boss Gene is the guy you love to hate. I have seen several drama pilots for the fall season here in the States and this one tops them all.
9/11/2006

Anonymous said…
I too have been a big fan of this show. I'll admit that I was a little disappointed in the finale in that it didn't clarify what was going on. I think they could have done so and continued the series in a number of ways. Personally, although I don't want the show to end, I'm looking forward to Sam "waking up" when it does and going to check on Gene, Chris, Ray and Annie to see if they were ever real.

Speaking of Annie, the last thing Sam said to her leads me to believe they might take the series in a direction I've secretly wanted.

Of course, Annie may be the proof Sam needs as to whether or not he's really in the past or not in a fairly unexpected way.

Sorry to blog on your blog. I just love this show and nobody I know watches it so I have to blather on here!
9/13/2006

Anonymous said…
I am so glad I tripped across this show. Since when did a "season" drop down to only 8 shows? I'm glad to hear that more episodes are on the way. Usually shows I love get cancelled right away.
9/26/2006