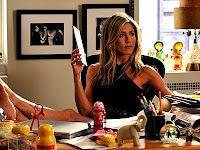 Another Thursday night, another fantastic episode of 30 Rock. There are some things in life that are just meant to be and 30 Rock proves that it hasn't lost its kooky charm, absurd humor, or bizarre characters in its third season.

This week's episode ("The One With the Cast of Night Court") proved no exception to the above rule, offering up a deliciously outlandish plot that involved new page uniforms, Liz's former roommate Claire (guest star Jennifer Aniston) stalking Jack, and a reunion of the cast of NBC's Night Court. That the latter storyline is a direct outgrowth of the first is just one reason why I can't help but fall for 30 Rock's oddball nature.

I was initially concerned that Aniston's Claire would steal the focus away from the other characters, but Tina Fey (who wrote this week's installment) and director Gail Mancuso did a fantastic job at juggling the Claire-Jack-Liz storyline and that of Kenneth and Tracy. In fact, I thought that Aniston's Claire (a.k.a. life coach Esmerelda Fitzmonster) was a fantastic addition to the already insane denizens of Rockefeller Center, what with her penchant for "sexy birthday" and "mannequin coming to life"-style surprises. I loved the way that Claire crashed Jack's charity fundraiser for Mee Ow (hee!), pulled off her disguise, and then proceeded to serenade him a la Marilyn Monroe (despite the fact that it wasn't actually his birthday at all), broke into his apartment dressed like a French maid and carrying a white pizza she had prepared, and later stole a policeman's gun and planted in on Jack, all in course of a single episode. Crazy putty indeed.

Liz, meanwhile, tried to distract Claire by taking her out to a new club called Aquarium, where the women stand out in a glass box and the men watch and feed them (thanks for the suggestion, Cerie!), only to have Claire decide to ditch her former friend and hook up with Jack instead. Jack, I have to say, has some very odd taste in women. Sure, he's dated Condi Rice and was married to Isabella Rosselini's insane socialite Bianca, but Claire takes the cake in the crazy department. Despite only having a few scenes together, I absolutely loved the chemistry between Jack and Claire and I sort of hope that Fey will consider bringing Aniston back for a second guest appearance in the future. After all, every successful single businessman like Jack needs a psycho stalker.

What else worked for me? I loved the way that Kenneth folded and saluted his former page uniform, the way that Kenneth's moral outrage at progress led Tracy to say that he wanted to pee on someone, Harry Anderson saying that he wanted to pitch a new character on Heroes whose power is close-up magic, Claire telling Jack that she loved him while having sex in a meat locker, and the Eyes Wide Shut allusion from Kenneth as he admits that the last time he was blindfolded, he was playing piano at a masquerade ball. (Seriously, what other series would reference Night Court and Kubrick in the same episode?)

And while it was great to see Aniston back on NBC, I have to say that I was even more pleased to see Night Court's Harry Anderson, Markie Post, and Charlie Robinson turn up. (We get an excuse for the absence of John Larroquette, though where was Richard Moll, I ask you?) Hell, even Jenna turned up to reprise her role as werewolf lawyer Sparky Monroe (seriously, LOL), a part that paid for her "hand reduction surgery." (You can't make this stuff up.)

And somehow the wacky subplots all ended up coming together as Tracy forces the NBC higher-ups to change back the page uniforms or he'll pull out of playing Mac in the upcoming Night Court feature film... and Liz ended up coming through for Jack once again (despite attempting--unsuccessfully--to delete his number from her phone and deny his call from jail) by bailing him out after his arrest.

All in all, yet another hilarious episode of a series that continues to surprise and impress me with its comedic instincts, unpredictability, and memorable dialogue. Cut to freeze frame.

Next week on 30 Rock ("Gavin Volure"), Jack and Liz are invited to a luxurious dinner party at the mansion of eccentric businessman Gavin Volure (guest star Steve Martin) while Tracy fears for his life when he thinks his kids are being too nice to him.

Anonymous said…
This was a great role for Jennifer Aniston. It was fun to see her play something other than the Pretty Girl. Her antics with Jack were hysterical (and a little bit scary). And I'm really looking forward to Steve Martin's appearance in the next episode!
11/14/2008

Anonymous said…
I could SWEAR Richard Moll was in the promo for next week's episode with Steve Martin! is the promo online? take a look at it and tell me if i'm right.
11/14/2008