Of Turkeys and Foos: Cheftestants Must Roll with the Punches on "Top Chef" 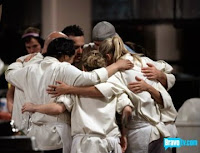 This being Thanksgiving, perhaps the most food-centric holiday in the American calendar, I couldn't let today go by without briefly discussing last night's episode of Top Chef ("Foo Fighters Thanskgiving"), which saw the cheftestants roll with the punches as they prepared a Thanksgiving Day feast for the Foo Fighters under some less than ideal circumstances.

But, hey, isn't that the magic of Top Chef, after all?

For their Quickfire Challenge, chefs were instructed in the true meaning of "rolling with the punches" and adapting to any and all changes in their plans as they drew knives to determine from what page of the Top Chef cookcook (ahem, product tie-in alert) they would draw influence for a dish that was a play on a recipe that appeared earlier in the series. Ten minutes into executing their dishes, Padma announced that there was a change of plan: they would now make a soup using the same ingredients and influences of that original recipe. Not exactly an easy task.

So who rose to the challenge? I have to give Leah massive credit for her white asparagus soup with tuna tartare, which was elegant and understated and beautifully captured the very essence of her original recipe, no small feat given her dislike of white asparagus. (I can't say I agree with her viewpoint on that front, however, as I love those albino spears.) Danny managed to surprise me with his mushroom and leek soup with ham and egg; I've no love for this particular cheftestant (and his later flipping off of Melissa won him no favors with me) but I do have to say that he did particularly well here. And once again, Jamie proved that she is a solid chef as she knocked the hell out of her soup again this week, offering up a scented chick pea soup with cilantro yogurt. Well done, Jamie.

Leah not only won immunity from the coming Elimination Challenge but also gained a solid advantage as she was able to pick her team for the Thanksgiving dinner task... and ended up selecting all of the top talent in the kitchen (save Eugene, who never seems to get credit for his culinary strengths), leaving Team Cougar with the cast-offs. Ouch.

It amazed me that the chefs thought that they would just prepare a Thanskgiving dinner for the Foos without expecting some other fly in the ointment and of course there was: there were no freezers or refrigerators at the cooking site, only one burner per team, and no ovens. Teams would have to cook turkey using either the microwave or a small convection oven... and that was bad enough before the rain started. (Seeing Fabio freak out that it was raining in his tiramisu was a classic Top Chef moment in the making.)

Overall, Team Sexy Pants (Leah's hand-picked team) had a better menu even if their turkey wasn't quite as moist and flavorful as Ariane's (who managed to redeem herself this week after two really bad performances over the last two weeks). Together they assembled a menu that included: roasted turkey, a whole roasted beef tenderloin, onion gravy, corn salad with wax beans, old-school style sweet potatoes with marshmallows and stewed fruit, roasted vegetable vegan corn bread stuffing, pumpkin tiramisu, and a peach and blueberry crisp. I thought that the tenderloin was a little overkill, but otherwise it was a solid menu that none of the judges took any offense to whatsoever. Yes, the turkey was comparatively not as good as Team Cougar's but it was still a tasty turkey and their sides and desserts absolutely shown.

In comparison, Ariane's turkey was hands-down the best thing that Team Cougar produced, along with Eugene's maple-smoked pork loin with apple chili-chutney, which Eugene was able to cook by rigging his own hibachi. Yes, while the other chefs bemoaned the lack of equipment, Eugene actually created his own and still had time to pull off an exquisite dish. Sadly, the same can't be said about the other members of his team. Their menu consisted of: the aforementioned pork loin, turkey breast with mushroom and caramelized carrots, vegetarian stuffed mushrooms and onion cream mashed potatoes, five cheese mac and cheese with bacon, spoonbread with fig, peach cobber with whipped cream, pumpkin mousse with berries, and banana s'mores with chocolate ganache and vanilla foam.

While Ariane and Eugene managed to pull off complicated and delicious dishes (along with Alex, who made the mac and cheese), the rest of the team didn't fare as well, with dessert being the main problem overall, along with Danny's choice to combine undercooked ("al dente") potatoes with fully cooked potatoes, a distastrous decision that I hoped would be enough to send him home. Sadly, it fell ultimately to Jeff--who emerged as the leader of the team--and Richard, who made those ghastly "s'mores" which guest judge Grant Achatz felt completely misunderstood the nature of s'mores in the first place and failed in concept and execution. It's never a good sign when the Foo Fighters think you spit on their dish and so Richard was told to pack his knives and go.

Personally, I think Danny should have gone (despite his strong performance at Quickfire) as it's never a good feeling to see a talented chef walk off the series for a sub-par dessert. Then again, it should be a reminder to future Top Chef participants to practice their dessert recipes now...

Next week on Top Chef ("Today Show"), guest judge Rocco DiSpirito has to decide which cheftestant deserves the grand prize of a live demonstration on NBC's The Today Show, but several of the chefs fall flat when faced with the daunting prospect of speed during a food demonstration challenge.

Anonymous said…
I agree. I was very sad to see Richard go home. I really liked him. But moreover, I just really wanted Danny to go. I am done with him. I am glad Jeff was spared. I wasn't crazy about him the first week, but he is growing on me.

"it's raining on my tiramisu!" Hee hee.

Anonymous said…
Richard's dessert did look pretty horrible but to get sent home for a dessert it pretty lame when his teammate, Danny, couldn't make proper mashed potatoes!
11/27/2008

TxGowan said…
Yeah, this is the second week in a row that somebody got away with not being able to actually cook. Last week, it was Ariane and this week it was Danny. How can you even possibly be considered a Top Chef if you don't know how to cook something completely?

I can forgive poor execution of an idea (see S'mores and the ostrich quiche), but missing basic technique should get you sent home almost immediately.

I'm with Ally. Jamie has been consistently good and I see her going all the way to the end. I'd like to see Eugene go all the way, too. It looked like they were anointing Stefan like they did Richard last year, but we know how that turned out, don't we?
11/29/2008