Nurse Made: An Advance Review of the First Two Episodes of Showtime's "Nurse Jackie" 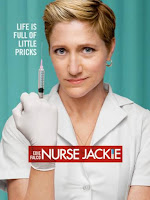 "I think one's feelings waste themselves in words; they ought all to be distilled into actions which bring results." - Florence Nightingale

Every once in a while a television series comes along in which it's impossible to imagine the lead being played by anyone other than the actor in question.

Showtime's gripping and darkly hilarious Nurse Jackie, which launches next month, is the perfect example of this. Edie Falco (The Sopranos) is so pitch perfect as the deeply flawed Jackie Peyton, a strong-willed and caustic ER nurse at Manhattan's All Saints Hospital who has no compunction about arguing with the know-it-all doctors... or of snorting some Vicodin in order to help her push past the pain of her busted back. In the gifted hands of Falco, it's inconceivable to imagine that Jackie Peyton isn't a real person, so totally does Falco embody the role.

Created by Liz Brixius, Linda Wallem, and Evan Dunsky, Nurse Jackie is midnight-dark comedy at its very best, offering a glimpse into the life of a woman who cares so deeply for her patients and yet does so much harm to herself and those around her. I had the opportunity to attend a select press screening of the first two episodes of Nurse Jackie at Showtime's offices last night and instantly fell in love with the warped world that Jackie inhabits.

In the hands of a lesser actor, I don't know that Jackie Peyton would be a sympathetic character. After all, she's a ballbuster at work, completely reliant on prescription painkillers to get her through the day, an addict and a cheat, and she doesn't suffer fools gladly. Yet Falco imbues her with a hidden vulnerability, a tenderness that comes out when she deals with her patients and their loved ones. A philosophical discussion between Jackie and her best friend, the ultra-glamorous British doctor Eleanor "Ellie" O'Hara (Eve Best), over lunch yields a key to understanding Jackie. While Ellie claims that she wanted to be a doctor because as a child she took a butter knife and cut open a dead rabbit to see "how it worked," Jackie wants to help people... even though she can't help herself most of the time. (I won't spoil for you just what Jackie does to a certain dismembered body part as it's the first episode's most shocking and triumphant moment.)

Whether it's the way that she fakes a dead bike messenger's organ donor status or steals the cash from a diplomat to give to the messenger's grieving (and broke) girlfriend, it's clear that Jackie's compassion for the people around her is both her greatest asset and her biggest hindrance. The sadness which falls over her tired face when peppy nursing student Zoey Barkow (Merritt Wever) calls her a "saint" reveals the true battle raging inside her, especially as it coincides with Jackie nearly killing a patient due to exhaustion. Is Jackie really a fraud? No, she's just a woman trying to do her job under impossible circumstances as she tries to do good and be good. And we can't help but feel for her situation.

Her attempts to heal also pit her against the often incorrect diagnoses of the arrogant doctors on her ward, especially young hotshot Dr. Fitch Cooper (Peter Facinelli) with whom Jackie seems to tangle on an almost daily basis. Cooper--or "Coop" as he prefers to be called--wears his white coat and Bluetooth like a badge of honor, though he's, much to Jackie's disappointment, as fallibly human as the other doctors around her. When Cooper's misdiagnosis results in the death of the aforementioned bike messenger, it leads to a showdown between the two... and results in Cooper grabbing Jackie's breast, a Tourette's-like condition Cooper claims compels him to make inappropriate sexual advances under stress.

While I've already raved about Edie Falco, I have to stop and say that the entire cast of Nurse Jackie is perfectly cast in their respective roles. Eve Best radiates the confidence of the upper class as the literally well-heeled Ellie; despite coming from different economic and professional worlds, the duo have a clear respect for one another that shows in their interactions. Merritt Wever is absolutely adorable as the naive Zoey, a young nurse in way over her head whose cheerfulness is counterbalanced by Jackie's own darkness. Haaz Sleiman is hilarious as gay nurse Mohammed "Mo Mo" de la Cruz, Jackie's confidante and partner in crime.

Peter Facinelli perfectly embodies the drive and arrogance of a physician who thinks he knows better than the nurses... even as he fears that he isn't really a good doctor. As Jackie's hospital boyfriend, Paul Schulze gives pharmacist Eddie Walzer a quiet tenderness that's a sharp contrast to to the chaos of the emergency room. Anna Deavere Smith is terrifying as brusque hospital administrator Gloria Akalitus, a woman who plays the game of hospital politics even as she expects Jackie to fall in line. (In fact, my only complaint about the series so far is with actor Dominic Fumusa, whose Kevin Peyton is sadly the least believable character in the group.)

Ultimately, Nurse Jackie is a reminder of why pay cable networks like Showtime remain a bastion of intelligent and compelling programming. It's hard not to fall for the charms of the sublime Edie Falco as she invites us into Jackie Peyton's helter-skelter world. And, after seeing just a single sensational episode of Nurse Jackie, I think you'll be hard pressed to want to leave.

I'm so happy to hear that you like Nurse Jackie (and very jealous that you got to go to a screening)! I love Edie Falco and have been very excited about this project. I can't wait to see it!
5/06/2009

Brodie said…
The poster alone makes me want to watch this show but your review ensured that I'll tune in.
5/06/2009