(Should Be) Committed: An Advance Review of FOX's New Medical Drama "Mental" 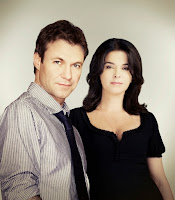 Dr. Jack Gallagher (Chris Vance) is willing to do anything and everything to help his patients?

How do we know this? Well, in the opening minutes of FOX's new mundane medical drama Mental, which launches tonight, we see Jack strip down to his birthday suit in order to connect with a naked patient suffering a break from reality. Yes, it's his first day as Director of Psychiatric Services at Wharton Memorial Hospital but, damn it, Jack is unorthodox and, let's just say it, committed.

Jack treats every patient like a puzzle that must be solved and he has a gift of getting into people's heads in order to understand them as human beings and then effectively treat the illness and not its symptoms. His nude display does him no favors with the rest of the hospital's staff, including his former lover and hospital administrator Nora Skoff (Annabella Sciorra), uptight Veronica Hayden-Jones (The 4400's Jacqueline McKenzie) who was passed over for Jack's position, attending physician Carl Belle (Derek Webster) whose calm exterior belies a deep hatred for Jack, lesbian doctor Chloe Artis (Marisa Ramierez), and womanizer Arturo Suarez (Nicholas Gonzalez).

I had the opportunity to watch Mental's first episode and what struck me right off the bat was just how completely different Colombia looks compared to Los Angeles. Shot on location in Colombia by Fox Television Studios, Mental is the first of a multi-series global co-production initiative to shoot entire seasons of new series in Latin America using American actors and then sell the completed series back in the United States. It's an ambitious gambit that could rewrite the rules of programming but I don't think that Mental is going to derail current business models any time soon.

For one, Mental, created by Deborah Joy LeVine and Dan Levine, doesn't entirely feel like an American-produced television series. The entire look of it doesn't capture the slick energy of, say, similarly medical-themed series House and the production values don't quite seem up to the snuff of a first-run primetime US series. And, as indicated before, the Bogota-based establishing shots and exteriors clearly set it somewhere other than the series' intended home of Los Angeles.

All of which would be quibbling if the series itself were strong. But there's a clear reason why FOX has decided to air the tedious Mental in the traditionally programming-lite summer season rather than in season: Mental isn't a particularly strong series, full stop.

Sure, Chris Vance (Prison Break) does his best to please as the passionate and determined Jack Gallagher, going to far as to disrobe in front of his new staff and break into a patient's home (when caught, he tosses off a blatantly over-scripted bon mot about "making house calls") in order to get to the root cause of their current condition. But, unlike Gregory House, Gallagher tries too hard to be sympathetically quirky and just comes off as annoying rather than earnest.

Likewise, Jacqueline McKenzie, so fantastic as Diana Skouris on The 4400, does the best she can with the role she's given but Veronica is so unlikable and shrill that you almost start to hope that she can suffer her own mental breakdown just so she can get out of doing rounds. And Annabella Sciorra irks as well. She's keeping a secret from her fellow hospital staffers and she needs Jack on her side even as she fights off an ongoing sexual attraction to the dashing doctor. Yawn.

The rest of the cast is serviceable but hardly exciting. It's hard to actually think of them as fully formed characters, rather than barely sketched cliches who exist to share exposition. And that's perhaps the biggest flaw with Mental: it's snooze-inducing from start to finish. The glacial pacing and one-dimensional characters do nothing but call more attention to the fact that we've seen medical dramas built around nonconformist medical practitioners before and done, well, significantly better.

Ultimately, you'd be better off avoiding Mental, taking two Ambien, and calling me in the morning rather than wasting your time this summer with this uninspired series.

AskRachel said…
Ugh. This sounds pretty bad. Even the title is boring. I just am disappointed that Jacqueline McKenzie isn't on a better show. I love her!
5/26/2009

Mazza said…
Figured it was only a matter of time before Fox cloned House. Sounds dreadful.
5/26/2009

Dani In NC said…
My husband and I watched the pilot episode of "Mental" before I read this review, and we came to the same conclusions. None of the characters are quirky enough to make us come back for a second episode, at least if this was airing during the regular season. Since it is summer and we are TV junkies, we may resort to watching it again after we've caught up on our DVDs.
5/29/2009