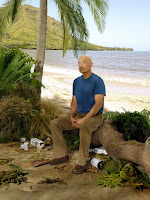 Lost showrunners Damon Lindelof and Carlton Cuse appeared on ABC's Jimmy Kimmel Live last night and announced that the series will wrap its run on Sunday, May 23rd. "The reason I think that anybody even cares about Lost is that we announced an end date three years ago," said Cuse. "We are eternally grateful to [Steve McPherson] to end the show on our own terms and I think that made all the difference in terms of Lost being the show that it still is." (Hulu)

Entertainment Weekly's Jeff Jensen has an interview with Damon Lindelof and Carlton Cuse about some of the more specific plot points from last night's season premiere of Lost. As it's not yet aired everywhere yet (UK gets it on Friday), I won't quote anything from the piece but urge you instead to check it out. (Entertainment Weekly's PopWatch)

FOX's Rupert Murdoch has acknowledged that it has had "conversations" with Conan O'Brien about hosting a latenight show at FOX but said that no real negotiations have gotten underway. The comments were made by Murdoch as part of his quarterly earnings call with investor. "If the programming people can show us we can do it ... and make a profit, we would do it in a flash," said Murdoch about O'Brien. He went on to say that he was "sure there have been some conversations" but "no real negotiations" had taken place. (Hollywood Reporter)

Doctor Who Magazine has revealed the titles for the first three episodes of Matt Smith's run on Doctor Who, set to premiere this spring on BBC One and BBC America. New showrunner and head writer Steven Moffat has written the first two installments, entitled "The Eleventh Hour" (fitting given Smith's status as the Eleventh Doctor) and "The Beast Below." These will be followed up by the third episode, entitled "Victory of the Daleks," and written by Mark Gatiss. Other writers confirmed for the fifth season of Doctor Who include Richard Curtis, Gareth Roberts, Chris Chibnall, Simon Nye, and Toby Whithouse. (via Digital Spy)

HBO is developing an untitled political drama that revolves around a "young political aide and his relationship with his idol--the former President of the United States." Project, from Leverage, will be written by Ben Schwerin and executive produced by Stephen Levinson, Mark Wahlberg, and Doug Ellin. Separately, the pay cabler is also developing a project with executive producer Tim Gibbons that will be based on Pamela Des Barres' memoir "I'm With the Band." Zooey Deschanel is attached to star. (Variety)

Pilot casting alert: Billy Gardell (My Name is Earl) has been cast as the male lead in CBS comedy pilot Mike and Molly, from executive producer Chuck Lorre. Elsewhere, Harish Patel (No. 1 Ladies' Detective Agency) has been cast in NBC comedy pilot Nevermind Nirvana, where he will play the father of two adult Indian-American children. (Hollywood Reporter)

Futon Critic is reporting that the fourth and final season of Saving Grace will return to the TNT schedule on Monday, March 29th with back-to-back episodes beginning at 9 pm ET/PT before it moves into its regularly scheduled timeslot of 10 pm ET/PT the following week. Southland, meanwhile, will wrap up its second season on Tuesday, April 6th. (Futon Critic)

Elsewhere, CBS ordered a pilot for drama ATF, from writer/director Michael Dinner, about "an ATF agent who hunts down the most dangerous criminals while trying to balance life as a dad to his teenage daughter who has re-entered his life." Project, from Sony Pictures Television and CBS Television Studios, will be executive produced by Dinner, Sarah Timberman, and Carl Beverly. Also on tap: a pilot order for drama The Quinn-tuplets, based on an Israeli series about five adult siblings who have had their entire lives documented on film. Project, from CBS Television Studios, is written by Mike Kelley and Chris Kelley (Swingtown). (Hollywood Reporter)

Looks like Oprah Winfrey isn't quite ready to leave behind her daytime talk show. Winfrey's nascent cable network, OWN, which launches in January 2011, will air Behind the Scenes: Oprah's 25th Season as a weekly primetime series that will depict the behind-the-scenes goings-on at the syndicated daytime talk show and focus both on Winfrey and other staffers. OWN also announced four additional series in development: Kid-napped, based on a British reality format about kids who force their working parents to spend time with them by taking away their Blackberries and mobile phones; Miracle Detectives, which follows a real-life believer and skeptic as they investigate mysterious incidents; Search, which follows people as they attempt to track down people from their pasts in order to find closure; and Sentenced, about real women in prison. (Variety)

CTV isn't waiting for CBS to announce an airdate for the co-produced drama series The Bridge, starring former BSG cast member Aaron Douglas. CTV will launch the series on Friday, March 5th at 9 pm with a two-hour premiere before shifting the series to its normal timeslot at 10 pm the following week. (Hollywood Reporter)

Hadley said…
Regarding "I'm With the Band" I'd love to see Zooey Deschanel in an HBO project. Much more exciting sounding than the political drama.
2/03/2010