TV on DVD: "Doctor Who: The Complete Specials" 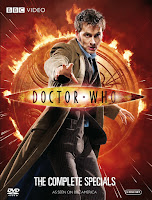 Prepare to say goodbye all over again.

I've only finally just gotten used to the idea that there won't be any more Doctor Who episodes starring David Tennant. Tennant departed the British sci-fi series after a handful of seasonal specials between December 2008 and January 2010 that depicted the Tenth Doctor locked in his final battle. A battle that resulted in the death of the Tenth Doctor and his regeneration.

Doctor Who has always been a series that not only endures after the departure of its lead actor but seems to revel in the new possibilities that an incoming actor can bring to the role of the Time Lord. Still, Tennant has carved out a sizable place in the ongoing mythos of Doctor Who for his portrayal of the lonely traveler and he'll be much missed.

BBC Video today releases Doctor Who: The Complete Specials, featuring David Tennant's final episodes as the Tenth Doctor. This five-disc set features all five of Tennant's Doctor Who specials, as well as a host of bonus material.

Each of the final five Tennant specials gets their own disk here, from December 2008's Doctor Who: The Next Doctor through the two-part swan song Doctor Who: The End of Time (Parts One and Two). It's actually quite nice to see each of the specials get some breathing space and warrant their own individual disks. Each of the specials really does function as its own mini-feature film, so there's something quite pleasant about them being treated as such rather than just shoehorned onto two discs.

Each of the specials is unique in plot and tone. Doctor Who: The Next Doctor finds the Tenth Doctor battling a steampunk robot in Victorian London and meeting a man who might just be his future incarnation; it's an adventure story about the price of vengeance and the power of loss. Doctor Who: Planet of the Dead is a caper story crossed with a tale of survival as the Doctor and jewel thief Lady Christina de Souza (Michelle Ryan) find themselves stranded on a strange planet with a busload of strangers with no way of getting home. Doctor Who: The Waters of Mars is a dark thriller as an alien presence invades Bowie Base One on Mars and the Doctor makes a decision that will haunt him. And the final two-parter Doctor Who: The End of Time (Parts One and Two) finds the Doctor fighting for his life as he is locked in battle once more with his greatest adversary, The Master (John Simm).

But the real treat here is the more than seven hours worth of bonus material that has been crammed into this release. Not only are there audio commentaries, deleted scenes, and episodes of Doctor Who Confidential, but there's also the Doctor Who at the Proms concert, David Tennant's video diaries from his final days on the set, and the entire Doctor Who Comic-Con panel from July 2009.

All in all, this is a must-own item for any fan of Doctor Who or David Tennant himself. With the fifth season of Doctor Who--starring Matt Smith as the Eleventh Doctor--set to launch this spring on BBC One and BBC America, there's no better time to say your final goodbyes to the Tenth Doctor with this incredible box set. Allons-y!

Doctor Who: The Complete Specials is available for purchase today for a suggested retail price of $49.98. Or pick up a copy today in the Televisionary store for just $36.99.