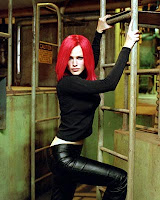 Could ABC be dipping its toes back in the Alias well? According to a story by E! Online's Kristin Dos Santos, ABC Studios is said to be considering a reboot of J.J. Abrams' Alias, which starred Jennifer Garner as superspy Sydney Bristow. "It's only very initial talk at this point, but I'm told that the development folks over at the Alphabet network are considering doing a new version of Alias that would borrow some elements of the original series," writes Dos Santos. "But the series would most likely not include any sort of complex mythological throughline such as the Rambaldi prophecy (a storyline that lost some of the fans). According to this source, ABC is hoping to hold onto its lost Lost audience with a re-envisioned J.J. Abrams series, in light of FlashForward not working out so well. (It was canceled last week.)" [Editor: Interestingly, ABC seems slow to get back into the superspy game, with NBC's Chuck already on the air and J.J. Abrams' own Undercovers heading to the network this fall. I also question the wiseness of rebooting a series that only ended a few seasons back and which is closely associated with a particular lead actress.] (E! Online's Watch with Kristin)

UPDATE: The Wrap is reporting that the potential Alias reboot would be for first-run syndication (a la Legend of the Seeker) rather than for primetime broadcast on ABC. "Network stressed to TheWrap that the talks are in very early stages, and that Jennifer Garner would not be in any way involved," writes The Wrap's John Consoli. (The Wrap)

USA Today's Bill Keveney has an interview with the cast of HBO's True Blood about the third season of the vampire drama, which launches next month and brings a slew of werewolves to Bon Temps.It's just another element added to the supernatural craziness of it all," said Anna Paquin. "There's no way you can ever get bored on a show like this. When you think you've seen it all and done it all, something weirder and wilder comes out of the woodwork." (USA Today)

It's time for Ghost Whisperer to fade into the afterlife. Entertainment Weekly's Michael Ausiello is reporting that the CBS supernatural drama--which starred Jennifer Love Hewitt--will not be picked up by ABC. "After five wonderful seasons and over 100 episodes, we are disappointed to announce Ghost Whisperer will not be returning for a sixth season," said Ghost Whisperer executive producers Ian Sander and Kim Moses in a statement. "We’ve had an incredible experience and owe a debt of gratitude to everyone involved. We continue our relationship with ABC Studios and look forward to developing many more successful projects together in the future." ABC later confirmed the report via Variety's Michael Schneider. (Entertainment Weekly's Ausiello Files, Variety)

Doctor Who executive producer Steven Moffat has teased details about the two-part finale of his first season of Doctor Who to Doctor Who Magazine, which concludes with the provocatively titled two-parter "The Pandorica Opens"--which will feature a cliffhanger for the Time Lord (Matt Smith) and his latest traveling companion (Karen Gillan)--and "The Big Bang." "It's not just the cliffhanger for Episode 12," Moffat told Doctor Who Magazine. "It's like the cliffhanger for every single episode up until that point. This is where the wheels come off. Everything the Doctor is running from lands on his head today." (via Digital Spy)

Little Britain creator/stars David Walliams and Matt Lucas are heading back to BBC One, with a new sketch comedy entitled Come Fly with Me, which will be set an airport and feature the comedy duo in a variety of guises. "It's thrilling that Matt and David's next big show will be on BBC One," said Jay Hunt, controller of BBC One. "They are uniquely talented comic writers and performers and Come Fly With Me is a wonderfully exciting idea." (BBC News)

Cartoon Network is prepping weekly animated series Green Lantern: The Animated Series. No information was immediately available other than the fact that the series will follow popular DC Comics character Green Lantern and will launch after this July's direct-to-DVD animated Green Lantern movie. (Hollywood Reporter)

Former Top Chef contestant Marcel Vigneron is heading to sci-fi territory. Syfy has announced that it has given series orders to three unscripted series, which it will launch later this year: Marcel's Quantum Kitchen, Paranormal Witness, and Face Off. (Variety)

Monica said…
I cannot wait for you review about first 3 episodes of True Blood!!Hope you upload it very soon!!
5/28/2010

gretchen e. said…
Very excited for the Doctor Who finale. This is the first season I've watched and I've been very pleased.
5/28/2010

Lizzie B. said…
Interesting thing with reboot of Alias (which would be great!), in whatever form may be, but as first run syndication? Isn't Legend of the seeker's cancellation prove that syndication is history? And isn't Tribune in bankruptcy? Why would be ABC studios again went to this kind of broadcast? I probably missing a lot info about all this stuff. Will miss LOTS, that's for sure :(
5/28/2010