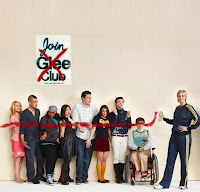 FOX has given a major vote of confidence to musical-comedy Glee, which it renewed for a third season... before the first season has even wrapped. News of the pickup was broken by Entertainment Weekly's Lynette Rice. "Everything about Glee – from the concept to the characters to the marketing – has been innovative and risky, but with [series creator] Ryan Murphy tapping into the zeitgeist, the risk has paid off with this truly remarkable series," said Kevin Reilly, FOX Entertainment President. "Glee has one of the most active, devoted fan bases I’ve ever seen, and we couldn’t be more thrilled to give Gleeks a third season of their favorite show." The upside for FOX and studio 20th Century Fox Television are obvious: "Not only does it help cut production costs over the long haul, it allows Murphy and his writers a chance to plan ahead (if not breathe a much-needed sigh of relief)," writes Rice. "Most important, it gives the studio a head start in taking the episodes out into the syndication marketplace." (Entertainment Weekly's Hollywood Insider)

Wondering why Mr. Eko wasn't in the Lost finale? E! Online's Kristin Dos Santos has learned that Adewale Akinnuoye-Agbaje turned down an offer to appear in the series finale of Lost. "According to ABC and Lost insiders, Adewale was offered a hearty sum to do one scene in the last hurrah, but the actor wanted five times the amount that was offered," writes Dos Santos. "It didn't work out." (E! Online's Watch with Kristin)

Dos Santos also answers questions from attendees at last night's E! Online Lost finale screening, including some heretofore unrevealed elements of Lost's mythology, such as the true name for the Man in Black. Watch the video to find out! (E! Online's Watch with Kristin)

Smallville creators Alfred Gough and Miles Millar have signed on to write the pilot script for ABC's Charlie's Angels pilot, which will be produced by Sony Pictures Television and is being eyed for a possible midseason launch. The duo replace Josh Friedman, who had originally been hired to develop the project, which will be executive produced by Drew Barrymore, Leonard Goldberg, and Nancy Juvonen. (Hollywood Reporter)

The Chicago Tribune's Maureen Ryan is reporting that British actress Emilia Clarke (Doctors) has stepped into the role of Daenerys on HBO's upcoming fantastic series Game of Thrones, replacing Tamzin Merchant, who left the project. Production will begin in July with reshoots scheduled for the pilot episode, which featured several actors who have since left the project, including Merchant and Jennifer Ehle. [Editor: I watched the original Game of Thrones pilot last week and was blown away. HBO has knocked it out of the park with this one.] (Chicago Tribune's The Watcher)

Lost director/executive producer Jack Bender has signed on to direct the 90-minute pilot for Syfy drama Alphas, written by Zak Penn and Michel Karnow. "We are very excited that Jack has chosen to be part of Alphas," said Mark Stern, Executive Vice President of Original Programming, Syfy and Co-Head of Content for Universal Cable Productions, in a statement. "His vision and expertise are perfectly suited to this project, and will truly elevate it." Here's how Syfy is positioning Alphas: "Alphas follows a team of ordinary citizens who possess extraordinary and unusual mental skills. Using physical feats and uniquely advanced mental abilities, this unlikely team takes the law into their own hands and uncovers what the CIA, FBI and Pentagon have not been able or willing to solve. These gifted individuals must balance their quirky personalities and disparate backgrounds with their not always visible powers as they work to solve crimes, stop the ticking time bomb and catch the enemy." (via press release)

SPOILER (if you haven't watched the Bones finale yet): Bones executive producer Stephen Nathan has promised "big changes" next season for the series in a new interview with Entertainment Weekly's Michael Ausiello. "The start of the season will have Booth and Brennan meeting [12 months later] at the coffee cart, and the series will start again… though on very different footing," Nathan told Ausiello. "There will be big changes." (Entertainment Weekly's Ausiello Files)

Deadline's Nellie Andreeva is reporting that Rand Ravich's ABC drama pilot Edgar Floats, which stars Tom Cavanagh, Robert Patrick, and Alicia Witt, is still alive and has received a order for six additional scripts, which means that the project is still in contention for a midseason slot on ABC's schedule. [Editor: having watched the pilot over the weekend, I can say that this is very good news indeed. Edgar Floats was a fantastic script and the best pilot I've screened so far this season.] (Deadline)

Paula Abdul is heading to CBS. According to The Hollywood Reporter's James Hibberd, Abdul is set to sign on to CBS' upcoming dance competition series Got to Dance, where she will serve as "lead judge, executive producer, creative partner, mentor and coach" on the series, which is produced by ShineReveille and based on the British competition series of the same name. (Hollywood Reporter)

ABC has signed a three-year deal which will see the Miss America Pageant head to the Alphabet. (Variety)

MTV has promoted Lauren Dolgen to SVP of MTV series development, West Coast, where she will report to Liz Gateley. (Deadline)

Thomas said…
Great to hear the Game of Thrones pilot has turned out so well.