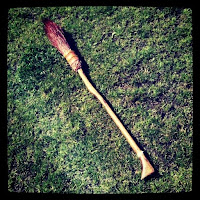 In the Harry Potter universe as created by J.K. Rowling, the sport of Quidditch plays an important and exciting role. On college campuses around the country, a generation of young adults who grew up reading about the exploits of Harry and his friends, have transformed the fictional sport into reality.

At The Daily Beast, you can read my latest feature, entitled, "From J.K. Rowling’s Harry Potter Novels to Real Life: The Sport of Quidditch Takes Flight." While it's off my usual beat, I decided to delve into the real-world sport of Quidditch and attend the Western Cup last weekend (along with a practice or two with the UCLA Quidditch team beforehand) and write about this cult phenomenon, a blend of rugby, basketball, and dodgeball. (And, yes, a little bit of tag as well.) There's also a gallery-based second feature that includes photography from the tournament, as well as more details about the rules, players, and world of "Muggle Quidditch."

The bone-crushing thud of a body hitting the ground. The splintering sound of a broom breaking. I’m at my first Quidditch match and am discovering it’s not for the faint-hearted.

The sport, brought to life from J.K. Rowling’s seven-volume Harry Potter novel series, has quickly become a permanent fixture on many college campuses, including UCLA, which last weekend hosted the third annual Western Cup. Nineteen teams—including the Power Grangers, Dirigible Plums, Narwhals, and The Prisoners of Kickasskaban—faced off in a grueling two-day tournament that pitted their strength, speed, endurance, and hand-eye coordination—not to mention the ability to keep a broomstick between their legs at all times.

Quidditch, as Harry Potter fans know, is played flying atop broomsticks. While I saw no one soar through the air, experiencing the nascent and theatrical sport firsthand gives you the opportunity to see just how brutal, competitive, and unique it is—a combination of rugby, basketball, and dodgeball, mixed in a witch’s cauldron.

Despite misconceptions about “Muggle” (i.e., nonmagical types) or “Ground” Quidditch, it is not a sport for nerds. “It’s really competitive and it’s not a sissy sport,” said UCLA freshman Sarah Coleman, a beater—they play defense—on the Wizards of Westwood team. “There’s blood … It is full-contact, with no pads, and it’s more intense than rugby.” Many Quidditch players are serious athletes who, to borrow parlance from the books, look more like Cedric Diggory than, say, Neville Longbottom.