The Daily Beast: "Gillian Anderson is Back!" 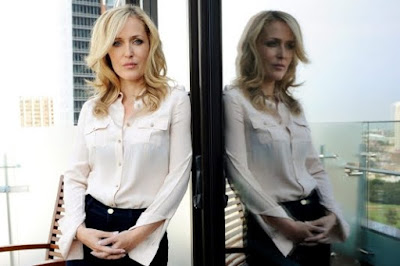 Gillian Anderson, famous for The X-Files, stuns as Miss Havisham in Sunday’s Great Expecations. She tells me about turning down Downton Abbey, her British accent—and possibly playing Scully again.

Over at The Daily Beast, you can read my latest feature, "Gillian Anderson is Back!" in which I talk to the former star of The X-Files about whether she's open to reprising her role as Dana Scully, playing Miss Havisham, turning down Downton Abbey, her accent, and her new television project, The Fall.

Gillian Anderson is no stranger to strange worlds.

The former star of The X-Files, which became a worldwide hit and spawned two feature films, Anderson has, for now anyway, traded in Dana Scully’s FBI-issued handgun and severe suits for the tight-laced corsets and flowing frocks of such period dramas as Bleak House, The House of Mirth, Tristram Shandy: A Cock and Bull Story, The Crimson Petal and the White, Moby Dick, and Any Human Heart, in which she played a deliciously conniving Wallace Simpson, complete with a false nose. But it’s Anderson’s jaw-dropping turn as Miss Havisham in Great Expectations, which airs Sunday evening on PBS’s Masterpiece Classic after a three-night run in December on BBC One, that erases any trace of Scully’s bravado.

An Anderson role in a period piece seems de rigueur these days: she was also very nearly in ITV’s critically acclaimed costume drama Downton Abbey, but turned down an offer to play Lady Cora Crawley, a role that went to fellow American Elizabeth McGovern. “They’re still mad at me,” Anderson told The Daily Beast. “Every time I see [creator] Julian Fellowes, he says, ‘Why?’ I’m very finicky.”

It’s no surprise that after her legendary turn as the emotionally haunted Lady Dedlock in Andrew Davies’s 2005 adaptation of Bleak House, which earned her Emmy Award and Golden Globe nominations, Anderson has a fascination with severe or extreme characters. In Great Expectations, adapted from the Charles Dickens novel by Sarah Phelps and directed by Brian Kirk (Game of Thrones), she stars as the malevolent and tragic Miss Havisham, whose blackened heart leads her to destroy the innocence of young Pip (Douglas Booth) and Estella (Vanessa Kirby), and doom whatever chance of love either has.

There was much grumbling in the British press about Anderson being the youngest actress to play Miss Havisham, who is traditionally portrayed as a skeletal old woman still dressed in the tattered vestiges of her wedding gown, clutching at the last shreds of her youth, while already standing in her grave. (Helena Bonham Carter will play the role in a feature film version of Great Expectations, out later this year.)