The Daily Beast: "Rewind: Rome Burns in I, Claudius" 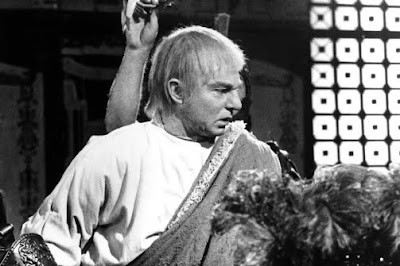 Thirty-five years ago, PBS captivated audiences with the blood-and-sex-laden ancient-Roman soap I, Claudius, which is still influential. A new DVD version comes out Tuesday.

Over at The Daily Beast, it's the first of a new series called Rewind, which will look back at a television show or film that has proven to resonate. You can read my latest feature, "Rome Burns in I, Claudius," in which I take a look at PBS' ancient Rome-set drama, which celebrates the 35th anniversary of its U.S. broadcast this year.

I, Claudius celebrates the 35th anniversary of its U.S. broadcast this year. A rapt and devoted audience consumed this spellbinding ancient-Rome period drama when it first aired in 1976 on the BBC in the U.K., and in 1977 on PBS’ Masterpiece Theatre. Starring Derek Jacobi as the titular character and featuring some of the best boldface names in British acting circles, the Emmy Award–winning show—which ran 12 episodes and is today being released as a remastered five-disc DVD box set—is a multigenerational saga about the emperors of ancient Rome and the conspiracies, intrigues, murders, and madness that stood in their shadows.

Despite the fact that the poison-and-plots-laden miniseries, adapted by Jack Pulman (who wrote every episode), is now approaching middle-age, I, Claudius—based on the 1934 novel (and its sequel) by Robert Graves—remains one of the best dramas ever to air on television, a deft masterpiece of story, character, and, perhaps most importantly, vivid atmosphere. Shot on multiple cameras (whereas today it would be shot on a single camera in a more cinematic fashion) and with a budget that didn’t include throngs of rioting plebs, the style lends an overtly theatrical and intimate air to I, Claudius, as though the television set itself were the proscenium of a great theater. It’s here that the court intrigues of several emperors—from Augustus to Caligula—play out episodically; the show itself takes place between the years 24 B.C. and 54 A.D., charting the ups and downs of the Julio-Claudian imperial dynasty as characters breeze in and out of the frame, returning decades later to enact bitter revenges or suffer themselves from the hands of poisoners, assassins, or godly whims.

Narrated by Jacobi’s Claudius, a stuttering, limping man thought by all to be a fool who is nonetheless prophesied to one day rule Rome, I, Claudius dramatizes the period leading up to his birth and through his death, as he—now an old man and fading from this world—writes down the story of his life and that of his conniving family. The show’s opening sequence—which depicts a snake, a venomous adder, slithering over a mosaic tile floor—is both iconic and only too fitting, given the series’ depiction of ancient Rome as a nest of vipers, the most deadly of which is Livia (Siân Phillips), wife of Augustus and grandmother of Claudius.