BuzzFeed: "7 Reasons Call The Midwife Is One Of The Best Shows On Television" 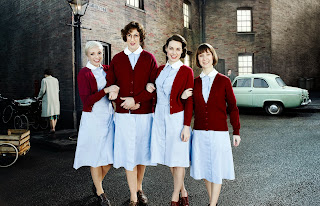 Besides the number of times this period drama makes you sob like a baby.

At BuzzFeed, you can read my latest feature, "7 Reasons Call The Midwife Is One Of The Best Shows On Television," in which I extol the virtues of Call the Midwife, which returns for its third season on Sunday, March 30.

The third season of BBC’s Call the Midwife — which wrapped up last month in the U.K. and begins on March 30 on PBS in the States — attracted an audience of more than 10 million viewers when it aired across the Atlantic, a figure that puts it on nearly equal footing with Downton Abbey. But that series gets far more attention than this subtle and superb period drama.

Set in 1950s East End London and based on Jennifer Worth’s memoirs, Call the Midwife tracks the lives of a group of young midwives and the sisterhood of nuns with whom they work at Nonnatus House. Babies are born, labors — both real and figurative — undertaken, and love blossoms and fades. It is an extraordinary show about birth and death and what comes in between. As written by Heidi Thomas and her talented staff, Call the Midwife manages to be both warm and profound in equal measure, opening a window to a time long gone yet offering a glimpse into the eternal and the transitory. It’s tea cozy television with a very deep soul.

But if you haven’t yet watched Call the Midwife (or have already fallen in love with its easy charms), here are seven reasons why it is worth watching. (Warning: Minor spoilers ahead.)