BuzzFeed: "Was That Good Wife Twist Cheap Or Profound?" 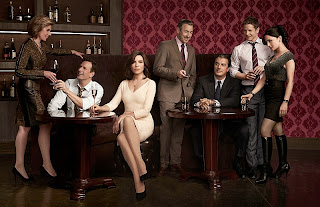 No one saw that coming, not even BuzzFeed Entertainment Editorial Director Jace Lacob and Senior Editor Louis Peitzman, who discuss the shocking reveal on the legal drama. MAJOR SPOILERS AHEAD, if you haven’t watched.

Over at BuzzFeed, you can read my latest feature, "Was That Good Wife Twist Cheap Or Profound?" in which Louis Peitzman and I debate whether the twist in this week's episode of The Good Wife was warranted or manipulative.

The March 23 episode of The Good Wife (“Dramatics, Your Honor”) pushed the critically acclaimed legal drama into new directions, courtesy of an unexpected plot twist that somehow stayed under wraps until it unfolded on-air.

(If you haven’t yet seen Sunday’s episode, stop reading right now. I mean it. STOP. Just stop. There are MAJOR SPOILERS ahead and if you’ve somehow managed to avoid finding out what happened, this is your last chance to do so.)

On this week’s episode, Will Gardner (Josh Charles) was shot and killed by his client — college student Jeffrey Grant (Hunter Parrish), who had been accused of murdering a woman he claimed was a stranger — during an eruption of gunfire in the courtroom after Jeffrey was seized with panic for his life and reached for a deputy’s gun. What followed was traumatic to watch: Will bleeding out on the floor of the courtroom, and then his body being discovered by Kalinda (Archie Panjabi) and Diane (Christine Baranski) on a gurney in the hospital.

For some, it was the perfect way for Josh Charles’ Will to leave the show, one that closed the door on any reconciliation between him and Julianna Margulies’ Alicia. For others, it felt like a cheap twist. We debate just how well the show handled Will’s death and what it means for The Good Wife.

Jace: I was genuinely shocked by the twist. Jaw-on-the-floor, didn’t-see-that-coming shocked. And for a split-second, I didn’t believe that Robert and Michelle King would actually kill off Will, who is nominally the male lead. But what The Good Wife has proven itself willing to do is to shake the foundations of its narrative in unexpected ways. And that’s what Will’s death has done. And in the Age of Spoilers, that they managed to keep it a secret is another miraculous feat. While I’ll miss Will, I love that the show was able to surprise its viewers in such a kick-to-the-gut sort of way.

Louis: I was surprised, too, though perhaps not as surprised as you were, thanks in part to the fact that CBS was heralding this as, “the episode of The Good Wife that you can’t miss.” I hate that. If you warn me that a big twist is coming, I will spend the entire episode waiting for a major character to die, and that ruins a lot of the suspense. But I digress. I will say that, yes, The Good Wife is willing and able to pull the rug out from under its viewers — and I think that’s why I was a little let down by Will’s abrupt death. It felt cheap, the kind of twist another lesser show would use. The Good Wife doesn’t need a random shootout to shock us.

Jace: Wait a minute: It needs to be said that Josh Charles had decided to leave the show a la Dan Stevens and Downton Abbey and was meant to leave at the end of Season 4 and came back under a short-term deal for the fifth season. To me, there’s no way to write Will out of the show that wouldn’t feel cheap except for him dying, likely in some chance way. To me, the fact that it happened under such unexpected and illogical circumstances compounded the tragedy. This wasn’t a protracted cancer storyline where Will learns he’s dying and has to say goodbye to Alicia. There is no goodbye, no closure, no catharsis about the time they lost fighting. His life ended, sadly and without reason.