BuzzFeed: "A Lover And A Hater Debate The Veronica Mars Movie" 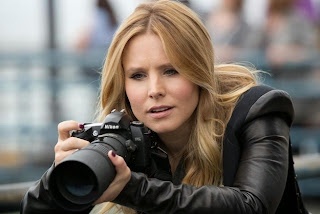 At BuzzFeed, you can read my latest feature, "A Lover And A Hater Debate The Veronica Mars Movie," in which I sit down with Kate Aurthur to debate the merits of the new Veronica Mars movie, which opens on March 14.

Jace: Ah, Veronica Mars. A long time ago, we used to be friends… And I’m honestly happy that the former teenage sleuth is back in the Veronica Mars feature film, which I quite enjoyed. Yes, I’m one of those people who has watched all three season of the UPN-CW drama several times over, and that may have played a role in my feelings about the film. But I feel like, while you loved the show, you didn’t feel the same way about the film?

Kate: Yes, I loved the show — or at least the first season, which I thought was close to perfect. After that, I found it sporadically great, with Kristen Bell being wonderful throughout, but the plots and her supporting cast hit-or-miss. (Season 3 was almost all miss, sadly.) As for the movie, I wanted to love it! And there were a few moments when I was transported and delighted, mostly, of course, because of Bell, who has worked steadily but hasn’t yet equalled her Veronica Mars heights. I just thought it all felt so… small. I had other problems with it, but let’s leave it at that for now. What did you like about it?

Jace: Well, I’ll be honest and say that the third season of Veronica Mars was… not very good. But those first two seasons — which had really taut, byzantine mysteries — felt closer in spirit to the film, which offers some genuinely surprising twists and callbacks. But the false note that the show ended on doesn’t diminish the pleasure that comes from catching up with Bell’s Veronica and the rest of the characters in the film, such as Tina Majorino’s Mac, Ryan Hansen’s Dick, and Krysten Ritter’s Gia. Yes, the movie is a bit of fan service (given that it was, well, entirely funded by the fans) and it certainly plays that way, even with the recap at the beginning designed to catch non-viewers up. (Are non-viewers going to see this movie? I doubt it.) And the film does offer a really fascinating look at how these characters have grown and changed in the time since the show concluded… though Neptune seems just as trapped in its noir-tinged class warfare as before.

Kate: Before I criticize it, I want to say a few things I really liked about the movie. Have I mentioned Bell? Bell. Bell’s a ringing, Bell on wheels, Bell and whistles, etc. Her delivery is sharp, and she punctuates everything she says with wit (but not wink), intelligence, and when the scene calls for it, a deep sadness. If only Rob Thomas — who created Veronica Mars and is responsible for its excellence, but has never directed a film before — didn’t squash so many of her jokes with his clunky directing. But back to the praise! Bell and her co-star Jason Dohring, as Logan, still have chemistry, both romantically and by being able to throw ping-pong-fast dialogue at each other. Gaby Hoffmann and James Franco (playing himself) both have inventive little arcs. I also liked the continued menace in Neptune; and I liked the sense that the characters, whom we haven’t seen for years, really have progressed in their lives — they’re all kind of different now, imperceptibly but actually. But, Jace, didn’t seeing the gang back together make you a little sad about the gang? The ensemble was fine for TV, but in a movie, I just got kind of depressed watching the Piz and Wallace of it all.