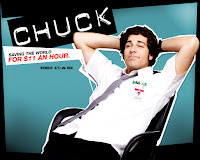 It was serious pandemonium as fans, who had waited in line for hours, finally got a chance to see the main event they had been waiting for. There were cheers, whoops of victory, and quite possibly a swooning, teary female fan or two among the throngs of people jostling for seats.

No, I'm not talking about the arrival of a rock star or celebrity. No, the thing that had electrified and enraptured the hundreds of people gathered at Comic-Con on Friday was the pilot for NBC's new fall drama Chuck. (I reviewed the pilot episode back in May in a review that can be found here.)

Watching a pilot has never been a bigger joy than it was with Chuck, not unsurprisingly the sleeper hit of Comic-Con. After all, Chuck--from creators Josh Schartz and Chris Fedak--has got a geek-friendly formula that blends workplace comedy, heartfelt romance, quarter-life crisis, and, well, action. I've been a fan of the show since I read the pilot script early this year and every cut of the pilot that I've seen has tickled the inner geek inside of me. (Suffice it to say, one of the major changes in this cut: the nudity in the locker room scene is gone. I cornered Chris Fedak to ask him why and he joked, "It was really impossible to make the nudity less nude for the network.")

So what did Chuck's cast and crew, gathered for the Comic-Con event--have to say? Let's find out.

Josh Schwartz was asked point-blank if the titular character was an evolution of a certain misunderstood, Death Cab for Cutie-espousing Orange County denizen. Schwartz says that Chuck isn't so much an evolution of Seth Cohen as it is a blending of his own sensibilities with that of co-creator Chris Fedak, with whom he attended film school, and that of star Zachary Levi, who brought his own take to the character. "We needed a guy who the audience would believe is a social outcast but who can also get the girl," said Schwartz.

So what was the inspiration for Chuck? Schwartz and Fedak (who are around my age) said that they're true products of the 1980s and fans of films like War Games and Goonies. As The OC was wrapping up, Schwartz sat down with Fedak to hear his pitch of the series that would become Chuck. Schwartz had always wanted to do a series about a 20-something guy who was always complaining about his life but have it be, you know, interesting rather than boring.

As for the pilot episode's feature film-level production values and stunts (especially those from the characters played by Matthew Bomer and Yvonne Strzechowski), director/executive producer McG said that they storyboarded all of the sequences and then had to "beg, borrow, scratch, and kill" to get more money from the studio to film the sequences. One of my favorite scenes--in which Strzechowski's Sarah throws a knife to activate an emergency barricade--was laboriously storyboarded in advance to give it a polished, feature look.

The audience loved the combination of Chuck's office humor and action, as some compared it to a love child between The Office and Alias. "I just want to put a pink wig on," joked Zachary Levi, who compared his character to a mix of Steve McQueen (ahem) and Jack Tripper from Three's Company and better described the series as a blend of The Bourne Identity and, well, The 40-Year-Old Virgin. Levi was amazed at the reaction and reception the series has received at the convention. "I almost want to cry," he said. "But I'm not."

Schwartz and Fedak revealed that there will be a mission every week and the show will be semi self-contained, with a mission o' the week, along with Chuck's trademark blend of quarter-life crisis, office comedy, romance, and "emotional stuff." McG added that "Chuck's workplace is every bit as dangerous for Chuck" and fraught with as much peril as the world of espionage into which he's suddenly been dragged, kicking and screaming. 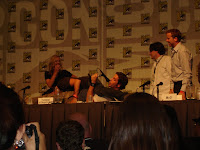 Then again, so is his relationship with best friend Morgan (Josh Gomez), with whom he shares an, er, intimate moment in the pilot episode. In fact, the mood was so high in the room that Gomez and Levi re-enacted this moment for all assembled (ahem, at left). These guys mean business.

As for the Polish-born (by way of Australia) Strzechowski, what drew her to the role was the chance to possibly perform her own stunts. She especially loved filming the car chase sequence (in which Sarah drives the Nerd Herd vehicle backwards through some crowded streets) and the knife-throwing. (A girl after my own heart.) For Gomez, who plays Chuck's sidekick Morgan, it was as soon as he read the script--and saw there was a ninja in it--that he knew he wanted to do the project. For Zach, a videogame aficionado, it was the chance to play a character that was just as into gaming as he is.

In fact, the Buy More scenes were shot in a CompUSA store and the producers kept having to drag Levi and Gomez away from the videogame displays in the store to shoot. So what's with the scar on Levi's hand then? Injury from an on-set stunt? Nope. It was a Nintendo Wii-related accident when the actor put his hand through a ceiling light fixture while playing tennis on the Wii.

Hmmm, maybe this guy is the perfect Chuck, after all.

Chuck launches this fall on Mondays at 8 pm, beginning September 24th, on NBC.

Anonymous said…
OMG! I can't believe you were at this panel and I missed you. I thought the pilot was great and the audience loved it. I can't wait to see the second episode!!!
7/28/2007

Anonymous said…
I loved the pilot and the panel was great. Everyone seemed to enjoy it as it had the perfect mix of funny and things blowing up that make for the perfect TV viewing. Now if only we could get the rest of America to tune in.
7/28/2007

Anonymous said…
Nice story man, just wish i was there! The audience must have gone crazy!
7/28/2007

Anonymous said…
The audience did go crazy! It was awesome!!!! I loved every second of the show and can't wait for the next episode.But who played Chuck's sister? she looks familiar.
7/28/2007

Anonymous said…
this show is incredible. by far my favorite of the upcoming season, and I've seen every single one that was picked up. love it!!!
7/29/2007

Anonymous said…
Definitely surprised by the quality of the show. Even more surprised at the commotion for autographs for the show's stars! I nearly got my a$$ handed to me what with all the pushing, shoving and general madness at the booth!! I hope the buzz translates into big numbers this fall as I'm looking forward to seeing more of Yvonne Strzechowski (sooooo yummy!!) :^P
7/30/2007

Danielle C.F. Maris said…
The extra money spent on the action sequences were definitely worth it. There are some truly fun, amazing sequences in the pilot! Hopefully, they're able to keep it up through out the show.
7/30/2007