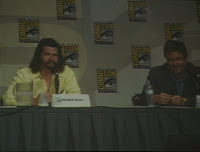 I wasn't sure how many spoilers would really come out at the Comic-Con Battlestar Galactica panel. After all, I like to keep my love for BSG very much spoiler free.

That said, there were a few reveals that were announced at what became the "Women of Battlestar Galactica" Panel, moderated by Entertainment Weekly's Marc Bernardin, himself an avid BSG watcher. Assembled for the event were Mary McDonnell, Katee Sackhoff, Tricia Helfer, and Battlestar creators Ronald D. Moore and David Eick. Joining them after a kick-ass montage of the female stars of BSG saying "frak" an awful lot was surprise guest Lucy Lawless.

Hmmm, now what could Lawless be doing there since her character--D'Anna--was put into, er, cold storage last season? Brace yourselves, Xena fans, Lawless has announced that she is returning to Battlestar Galactica for the fourth season!

Lawless will return for a story arc of about two to three episodes in length during Season Four. Look for D'Anna, who will be unboxed, to turn up around episode ten or so. (The episodes themselves have yet to be shot.) And, as Ronald D. Moore said, "All hell breaks loose." I cannot wait!

Other intelligence gleaned from the panel? Moore said that he and fellow co-creator David Eick have talked about the end of the series for a while and there have been "a lot of conversations in the writers' room" about just how the series would wrap up. While a big part of the conclusion will involve the search for Earth, there are a lot of questions to be answered: What happens to Adama? What happens to the Galactica itself?

So who's destiny will the viewers be most surprised by as we move into the series' final season? Moore says that Baltar (James Callis) and Six (Tricia Helfer) have an especially interesting journey ahead of them and it will be particularly surprising to see where they end up by the end of the series. Likewise, all of the characters will go through different journeys. Neither Moore nor Eick ever anticipated where the journey of Lee Adama (Jamie Bamber) would take him. Same with the four Cylons revealed at the end of Season Three and, for that matter, the Cylon nation itself, which is in a state of transition.

Eick joked that the final season of BSG would "answer which of the crew is NOT a Cylon." 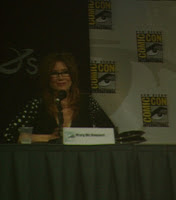 A question was posed to Mary McDonnell about how she felt about her character's cancer resurfacing. "I felt a little ill," she said, "and worried that I was going to be killed." Still, McDonnell admitted that she felt "gratified that the producers didn't just let her cancer disappear and Ron [Moore] committed to it as part of Laura's journey." Moore, for his part, said that when Laura was cured in Season Two, he always knew the cancer would eventually return. "I'm tickled because Laura got saved by the blood of a Cylon," McDonnell joked. "It just doesn't mix well."

When asked which of their fellow actors they'd most like to share a scene with, McDonnell answered that the women don't really work together all that much. "We're frequently pitted for or against a man," she said. "The [actresses playing] Cylons have more contact with one another than we do." Katee Sackhoff added that she wished she "had more scenes with Tricia where we're not beating each other up with arrows." For her part, Lawless said she wanted to do a scene with McDonnell, leading Moore to reveal that the two will in fact get to hang out next season.

Another question was posed to the ladies about how much of themselves they put into their characters. Lawless admitted that, like D'Anna, she's very naughty and "kind of a troublemaker." Helfer said that she especially enjoys the "physical side of Six" as she grew up as a "tomboy" but also added that much of Six's vulnerability was derived from her as it was her first acting role.

Sackhoff said that she believed she was very different from Starbuck. "She's very tough," she said of Kara Thrace. "I'm not really that tough. Her vulnerability is me. I'm a shy, very vulnerable person when I don't know someone and I wanted something that would make [Kara] less masculine and humanize her."

McDonnell laughed. "I began to play Laura by keeping the stubborn, ruthless qualities of myself hidden," she said. "It was a liberating process to let the qualities needed to come out and flourish. I really am very stubborn!"

So what will they miss most once Battlestar wraps its final episode?

McDonnell: "My clothes... That was a joke. You finish a character and as an actor you go through a period of grief and loss. When you give up a five-year gig, fear emerges. You've been living with this other person inside you. The Laura Roslin inside me has been a best friend to me."

Helfer: "The support we all get on the show. And the writing. You don't always get to do the quality of the work we're getting to do [on this series]."

Moore: "It's like senior year, very bittersweet. I'll miss the cast, the crew, the production staff, the writers... the set. But what I'll miss most is the characters. When the show ends, you never get to explore these characters again or sit in the writers room and think about how we can break down Adama the man."

Sackhoff: "On my last day, I want to put on my flight suit and drive home with it on. Just take it with me."

Before the panel ended, a brief teaser trailer was shown for Battlestar Galactica: Razor, the two-hour movie which bridges the third and fourth seasons. No real spoilers were unveiled in the preview, which depicted scenes of both Admiral Cain (Michelle Forbes) and Lee's command on the Pegasus. However, Eick revealed that the film will feature the original series' Centurions and Raiders. (I'm having a nostalgia trip right now.) As for the title, it's a reference to the film Patton, in which George C. Scott surveys his troops and says "We'll turn these guys into fanatics. We'll turn them into razors." Very interesting...

Razor will air on Sci Fi on November 24th, with the DVD release scheduled for a few weeks after that. Just don't expect that mind-blowing cliffhanger from the Season Three finale to be resolved in Razor; you'll have to wait for the fourth season to launch in January 2008 for that.

Asta said…
Best recap I've read yet of the BSG panel. I agree with Tricia that these actors are unlikely to ever work on a series of such quality and artistic freedom again.

And thanks for providing an airdate for 'Razor'. I've only heard it was airing in November until now.
7/29/2007

Anonymous said…
I agree. Most of the coverage I saw focused on the news that Lucy Lawless was returning and that was it. I am always impressed how much more information you're able to take away from these panels.
7/30/2007

Danielle C.F. Maris said…
The anticipation is killing me. I'm so sad that BSG is ending but I know it's going to be brilliant and go out with a bang!
7/30/2007