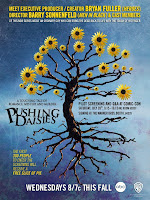 Yes, I've already seen the pilot for Pushing Daisies a zillion times. (Come on, where were you when I published my advanced review of the pilot--the first one on the Internet, mind you--way back when in May?)

All joking aside, the fact that I've seen the pilot hasn't stopped my eagerness to catch the cast and crew of Pushing Daisies at Comic-Con San Diego at the end of the month for a sneak peek and Q&A panel on Saturday, July 28th at 9:15 am.

So, if you're going to be in SD for the con, I strongly urge you to drop by the screening and try to figure out which gushing fanboy I am.

If that's not enough incentive, how about this brand-spanking-new promo for Pushing Daisies, courtesy of the wonderful folks at Warner Bros. Television?

Come on, aren't you just dying to see the series right now?

The CineManiac said…
I have to admit it was a hard choice between this and the Bionic Woman screening since their times overlap, but in the end this won out.
Besides I'll get to see the beautiful Sackhoff at the BSG panel, so I guess I can wait a few hours.
BTW you going all weekend or just for Saturday? Maybe we'll bump into each other.
7/13/2007

The CineManiac said…
Also if the show itself didn't have me dying to see it, the name of his dinner "The Pie Hole" would have got me there.
7/13/2007

Matt said…
I've been seeing previews for Pushing Daisies for a while now and the entire time I could've sworn that the girl was Zooey Deschanel. I just found out it's not her but this show looks quirky and entertaining enough that I'll do my best to suck it up and watch anyway.
7/13/2007

Jace Lacob said…
Matt, nope, it's the adorable Anna Friel, whom I promise you'll fall in love with after you see the pilot. Trust me.
7/13/2007

Jace Lacob said…
Cinemaniac, I'll be at Comic-Con Friday through Sunday (damn Lost event got shifted to Thursday though), so I will be around!
7/13/2007

I've seen both the Pushing Daisies pilot and Bionic Woman. Both are great but I think you made the right decision to see PD at Comic-Con. You're in for a real treat! Plus, I'm sure it will look stunning on the big screen. Enjoy!
7/13/2007

Anonymous said…
Yes, I read your review back in May and I'm still jealous that you get to see the pilots so early. Any chance you can slip those of us who can't go to Comic Con a copy of the PD pilot? I'm begging you, man.
7/13/2007

Anonymous said…
Kristin Chenoweth is so hot in that show. Oh my God... She's amazing. (She plays Olive Snook)