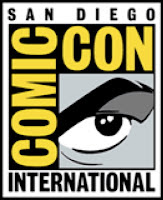 Hello, readers. I'm taking the day off today from my writing duties at Televisionary, following a jam-packed three days at Comic-Con in which I poured my heart out for you, my gentle readers.

Below you'll find a whole slew of Comic-Con related material, including exclusive interviews with Pushing Daisies creator Bryan Fuller and the cast of Pushing Daisies.

What else do I have you? Well, there's also reports on panels for ABC's Lost, NBC's Chuck, FOX's 24, USA's The 4400, and Sci Fi's Eureka and Women of Battlestar Galactica, and information gleaned from the Futurama panel (new movies!) and the Joss Whedon panel (Ripper is a go!), so browse and comment away to your heart's delight.

Me, I think I need a day to sleep off my con experiences and finish writing up my notes from a few more panels I covered. Either that or a very, very large Coffee Bean tea latte.

Digging Up Dirt: Televisionary Sits Down with the Cast of "Pushing Daisies"

Counting Down with "24" at Comic-Con

HBO's polygamist family drama Big Love is back. On tonight's episode ("Kingdom Come"), HBO promises the most dramatic episode yet; Bill devises a new schedule for his three wives while inciting Roman to retaliate against the Greenes, Frank locates Lois' hidden stash, and someone fires a gun.

No, I don't know why I am still watching this train wreck of a culinary competition. On tonight's episode, the final three contestants are tasked with reinventing a classic American dish for a sophisticated fine dining establishment (um, where would that be?), which will be judged by their mothers, who are unaware of who cooked what.

Season Three kicks off tonight with Tony exploring the Far East as he takes a tour of Shanghai's culture and cuisine. Mmmm, stinky tofu...

rockauteur said…
Thank god Jen was eliminated last night on Hell's Kitchen. I am not one to be superficial (who am I kidding, I live in LA), but I couldn't stand to look at her let alone listen to her whiney voice say "look it, big lights" in Vegas or cry when someone gets eliminated. Thank god. Not that Bonnie is a real chef, and seems to be getting the Virginia slot from last season of underqualifed chef in the finals. Roc is obviously the foregone winner though his skills ain't up to par either - those "gourmet" spaghettis, that Gordon was forced to compliment, looked like pasta picked from the pin with some slabs of stale garlic bread sitting on top. I could cook something better than that, and make it way more pleasing to the eye... and I can't really cook!

Someone get the Granada/A. Smith casting department the number for the Top Chef casting director, stat.
7/31/2007