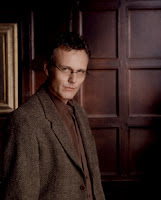 In a surprise Comic-Con announcement, Joss Whedon has confirmed that the long-gestating Buffy the Vampire Slayer spin-off, entitled Ripper, finally looks like it's going forward.

Whedon says that he's thisclose to signing a deal with the BBC to finance a 90-minute telepic that will star Buffy's Anthony Stewart Head as former Watcher Rupert Giles as he combats the things that go bump in the night sans Slayer.

The deal hasn't been signed yet, so anything can happen, but Whedon was quick to say that no US distribution has been decided. Meaning that it's still a bit soon to circle a launch date on your calendar or break open the bubbly.

Meanwhile, Whedon has launched a non-Buffy-related online comic called Sugar Shock with Dark Horse (the publishers of the Buffy Season Eight comic). It's free, it's online, and it might just tide you over until Ripper... or the next issue of the Buffy comic.

Anonymous said…
So Ripper is really happening then? I'll believe it when I see it. I trust in the Joss but I'm still waiting for those planned Angel movies and those never made it on the air.
7/28/2007

Anonymous said…
Yeah, but this time it seems like Joss means it. I would be surprised if it didn't actually happen, to be honest. I'm already excited about seeing Tony Head play Giles again!
7/28/2007

Anonymous said…
Oh my gods. I cannot wait for this to happen. I've been waiting for Ripper for years. Any idea, if the deals go through, when this might make it on the air?
7/29/2007

The CineManiac said…
This is awesome! Unfortunately I was not at the panel and missed this. Was Joss as amazing as I have always assumed he would be?
The line was far to long so we went to the Marvel Studios and Columbia panels instead. Which were pretty amazing themselves. (I also missed the Heroes and BSG panels, in fact the only panel I planned to go to and actually made it to was Pushing Daises)
7/29/2007

Anonymous said…
This is great! I love Tony Head and think this will be a fantastic story. Hopefully, we won't have to late too long to see it.
7/30/2007

Anonymous said…
I believe Joss is really going to make the movie. Besides Anthony said he would like to play Giles again not many time ago. But I can't wait 'til then. And as it's only for the BBC I suppose it will not arrive to Spain.
8/10/2007