The Adventures of Not Quite Tom Sawyer: Getting "Lost" with Josh Holloway 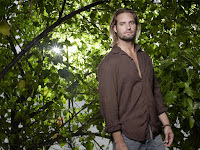 Wrapping up my week-long series of chats with the cast of Lost, we come now to Josh Holloway, whose character James "Sawyer" Ford (for those of you living under a Black Rock) has proven one of the series' most popular and conflicted: torn between his need for revenge and his attempt to move beyond it and embroiled in a love triangle with Kate Austen firmly in the center.

I sat down with Holloway to talk about Tom's murder in Season Three, what to expect in Season Four, and what Sawyer would drink.

Q: Josh, what the hell was with the twist ending at the end of Season Three. Were you surprised when you read the script for that?

Holloway: I was like, “Really?! I love it, but where are we gonna go from there?” That was my question, but I really felt like for a season finale it was one of the best – as an audience – one of the best written and well executed season finales I’ve seen in a while, so I was really proud to be a part of that. I finally got to see it three weeks after everyone else. I had taken off to Europe, so I got back and was like, “Ah, I get to see it!”

It was really well done and set up the next season perfectly, for what’s going on [in Season Four]. It’s gotten really intense, and they’re just exploring all the different aspects of the characters. I feel like they have done a lot of character exploration before, but the story’s getting concise… Sawyer in Season Three has taken quite an emotional journey. They’ve pretty much put him through everything from captivity, to love, to now at the end, murder…

Q: Let’s talk about Tom’s murder at the end of Season Three. Did you buy into Sawyer’s motivations there or did you have some qualms about the darker area that Sawyer was being taken into?

Holloway: Well, both! I had some qualms about the darker place that he was going, just because I was like “Oh, ok, so where do you go from there?” Naturally, as an actor, you think, once I go there, where are we going? But, then I really looked back at the season--and also from the beginning of the show--and I feel like part of Sawyer’s whole journey is facing his demons and his own humanity. I feel like he had a little bit of a reversion back to the old Sawyer’s way of dealing with things. And because he was captured, and really faced death, like he thought he was dead, bullet to the head – it’s done – and these guys facilitated that, I think that’s where he was coming from.

Q: One of the main plot points for the first three seasons was Sawyer trying to enact revenge on the man who destroyed his family. Do you feel like he’s achieved that and it will settle his inner demons?

Holloway: I feel like there’s definitely closure to that specific thing he was looking for all those years, but what he didn’t realise was now that that is not the only thing that has been driving him and that it is not his only demon.

Q: What you can tell us about what we can expect for Sawyer in Season Four?

Well, even I don’t know what to expect from Sawyer in Season Four right now, so that’s a hard question to answer. We’re only just beginning that exploration. My experience from the show is that they set you up and then take you in a completely different direction so I don’t really know where they’re going to take him. Right now, I feel like he’s kind of fragmented… I feel like he’s trying to back peddle a little bit, because he’s human and it felt good to have people not hate him constantly. What worked in society did not work on the island so well, or works differently, so I think he’s once again facing that demon and thinking “Oh shit, now what am I gonna do?”

Q: If Sawyer is one of the lucky few to get off the island in Season Four what do you think he’d do?

Holloway: Go to a bar and have a cocktail. A proper cocktail. He would just say, “Bartender, leave the bottle!”

Q: What does Sawyer drink?

Holloway: I’d have to go straight-up. Jack Daniels, or Wild Turkey. Clean, neat, no ice, please. After that long on an island, oh Lord. Maybe just the bottle, no glass.

The CineManiac said…
I'm so jealous you scored these interviews. I can't wait for the new season of Lost, hopefully I can even watch it soon.
1/31/2008

Anonymous said…
Great interviews. Were any of the actors different than you expected? Who was the nicest? Funniest?Give us all the juicy gossip!
1/31/2008

Anonymous said…
He seems just like the kind of guy you'd want to go and have a beer with after the show. Was he just cool and down to earth?
2/01/2008