The Curious Case of Benjamin Linus: Getting "Lost" with Michael Emerson 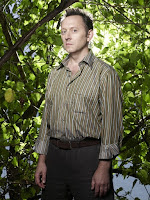 I'll be blunt: Benjamin Linus scares the living bejesus out of me.

So I was a little terrified (to put it mildly) to be in the same room with Michael Emerson, who plays the villainous (or is he?) Ben on ABC's Lost.

But I am glad I put my irrational fear of Ben out of my mind as the soft-spoken Emerson was the very opposite of the character he plays on Lost: articulate, charming, and disarming... which just might be what makes Ben so dangerous.

I sat down with Emerson to talk about what we could expect for Lost's fourth season (kicking off on ABC this Thursday) and the ruthless leader of the Others.

Q: In the last part of Season Three, we learned a great deal about Ben’s backstory. Do you view him as a hero or a villain? And going into Season Four, does your perception of him change?

Emerson: Well, I’ve always had a notion that there was something heroic about him, that there was more to him than met the eye. That notion has been challenged somewhat by the sort of wickedness that seemed to be his, late in Season Three. But I’m going to hold on to the idea that we will revisit some of those events and they will be put in a new context. I think it’s still possible that Ben’s secret agenda is a heroic one.

Q: Throughout your career, you’ve been attracted to very complex characters. What about Ben attracts you as a performer and what about him do you find so incredibly engaging?

Emerson: I don’t know if I’m attracted to complex characters or really simple characters. Maybe it’s a little of both. But I do like that Ben is ambiguous. I’ve always liked that. I think because it tells the truth about people in general and about wicked people in particular that we don’t wear much of who we are on the surface. So, I enjoy playing him in a sort of a neutral gear and I think it leaves more to the audience’s imagination, which is what everyone in show business should be in the business of.

Q: At the end of Season Three, we saw Ben striving to prevent the castaways from activating that satellite phone and he was, at the very end, bloody and beaten. What kind of circumstances, both emotional and physical, do we find Ben in at the beginning of Season Four?

Emerson: We pick right up where we left off. The early part of Season Four is, if anything, more blood, more beatings, more violence. It’s… a period of upheaval in the lives of the Lost-aways and their adversaries and, of course, there are new adversaries as well.

Q: Were you surprised about the twist ending at the end of Season Three?

Emerson: I thought it was a stroke of genius. To project the show into a third sort of dimension of time, this is the thing that will make Season Four so great. It's some highly subtle video game we’ve now broken in to the tier of expertise so, a show that was previously two armies of adversaries working in two dimensions of time, now it’s going to be three armies and three dimensions of time. But it just gets more complex and, I think, more grown up.

Q: While I know you can’t go into specifics about Season Four, in terms of the dynamic between your character and Elizabeth Mitchell’s Juliet, do we see another shift in that sort of adversarial, sometimes on the same side dynamic?

Emerson: Yes, that relationship gets explored regularly on the show, generally in flashback, as far as I know. But... there are present day confrontations about to erupt.

Q: What do you hope to see for Ben in Season Four?

Emerson: What do I want to see for Ben in the fourth season? I hope that Ben is able to remain as compelling and mysterious as he has been. I think we’ll see Ben face greater challenges with fewer resources and that he might be propelled into a sort of a more heroic aura.

Hmmm, a heroic aura for a character who has proven himself a Machiavellian manipulator of the highest order? Stranger things have happened on Lost and I for one can't wait to see what happens to Ben next.

The CineManiac said…
Can't wait to watch the premiere this week, and as I've said I'm super jealous of you for this interview.
1/28/2008

Anonymous said…
Thanks for the fantastic interview! I needed a Lost fix and this was perfect. Michael Emerson is such an incredible actor and, obviously, a very intelligent person too. I can't imagine Lost without him!
1/28/2008

Anonymous said…
Awesome interview! I can't wait for next season and for your piece with Elizabeth Mitchell. Lucky dog!
1/28/2008