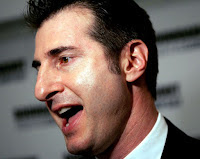 In case you haven't heard, Brothers & Sisters creator Jon Robin Baitz is no longer involved with the ABC drama.

But lest you say he was fired off of the series he created, he's quick to point out that he was "ousted, not fired, an important distinction," in a heartbreakingly honest two-part piece Baitz has written for the Huffington Post about the nature of his, er, departure from Brothers & Sisters. (Part One can be found here.)

He admits that the series, which struggled early on in its run, needed help. "I will very openly state on the record that the second show-runner who stepped in, did, in fact, quite literally save the show," writes Baitz, "and that in fact, were I left to my own devices in TV land, it is fairly certain that B&S would have been canceled within hours of the third episode."

Despite acknowledging deep-seated tensions between him and the studio, Baitz is quick to point out that the rumors swirling about his ousting, including a blind item last month in the Ausiello Report, didn't emanate from him.

"The writer of the [...] cutesy blindish item had been digging at the story like a fey Tuscan truffle pig on the hunt, pointed in the right direction by a sly studio farmer," writes Baitz. "In Hollywood, that makes guys like Ausiello seem like Woodward, Bernstein, and Upton Sinclair all rolled into one unctuous package."

Baitz certainly isn't one to hold his tongue, not about Ausiello or about the network and studio demands, the source allegedly of the in-fighting among the series' creator and the suits. If he's learned anything from Brothers & Sisters, it's that he has to fight, Baitz claims. In one particularly brutal passage, Baitz writes:

"I am no longer the SOURCE for any of it, no longer the instigator of plot, and no longer the voice of the thing. It is no longer in my dreams. I do not wake up and make notes about future episodes. I can no longer argue for tone and can only watch as the demographic demands that have turned America into an ageist and youth-obsessed nation drives the storylines younger and younger, whiter and whiter, and with less and less reflection of the real America, which is made up, to the sorrow of the research departments, of people over 35 years of age and of many ethnicities and incomes. Then again, I will never again have to do a notes call wherein the fear and sea-sickness of the creative execs always prevails over taking a risk, resulting more often than not in muddy and flattening or treacly-sweet compromises after a stolid and pointless series of writerly objections. (And note to execs on my next show: you won't wanna be giving me too many of them. Sorry, I shan't roll over ever again.)"

It's an awe-inspiring monologue about the nature of the television beast and about the push and pull between corporate bottom-lines and creative types. (Or as Baitz puts it, "The war with the studios has arguably radicalized me, which is a good thing, and I will never again enter into another relationship with a studio (or perhaps person) in either hope or fear, only the stoic certitude of a veteran of foreign wars.")

It's definitely worth a read and some further discussion, regardless of whether you watch Brothers & Sisters or not.

Anonymous said…
I don't watch Brothers and Sisters but I found Baitz's plight to be both fascinating and terrifying. It is extremely rare that a network or studio allows for truly original programming and, even when they do, that show doesn't tend to stay on the air for long (Arrested Development, Veronica Mars, Firefly...)

So, is it worth sacrificing creative vision if it means keeping a show on the air? According to Baitz, the answer is "No." But then you risk never having your vision seen at all. (This is a theme at the heart of the hilarious film The TV Set, which I highly recommend for anyone interested in going into television).

But at least there are a few glimmers of hope out there - like Pushing Daisies, which will hopefully survive for longer than a season and will inspire more writers to fight for their creative vision.
1/03/2008