The Sun Also Rises: Getting "Lost" With Yunjin Kim 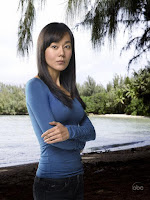 While Lost boasts an impressive cast against which most series are measured, there are a few characters who seem to universally catch on among fans. One such character is Sun-Hwa Kwon, played by Korean actress Yunjin Kim.

I sat down with Kim to talk about Lost's success in the international marketplace, what to expect for her character in Season Four, and Sun's, er, unexpected herb-growing abilities.

Q: Why do you think Lost has become such an international phenomenon? Do you think that that’s in part due to the diversity of the characters?

Kim: Oh, I think diversity of the characters definitely has a lot to do with that. But I think Lost deals with a lot of universal issues. We’re talking about being deserted on an island and creating a new type of society with such a [diverse group of] people and what we deal with every day are universal questions like, “Why am I here?” “Who am I?” “Can I let go of my past and move forward?” And, I think, for some reason that catches a lot of people’s attention. Also we deal with a lot of fun elements and there’s a lot of action, danger, love. It’s all the basic interests that people want to see.

Q: Speaking of love, would you say that Sun and Jin have the only relationship that’s actually benefited from being on the island?

Kim: Well, Sun and Jin were the only married couple so I used to joke and be like, I’m the only desperate housewife on this island. And Sun was quite desperate from the very beginning. We’ve moved on and they’ve grown, both of them, especially in their relationship. There are other characters [in relationships] and the only difference is that we’ve already had a relationship. We were already married and then there was a plane crash on this deserted island so--

Q: Given the threat of the curse on the island and pregnant women, is there a happy ending maybe in store for the two of them?

Kim: I don’t know. I have no idea. I mean, I’m okay so far. And, we have to remember that one season we only move forward, what, 30 days? So, we’ve only been on the island for 90 days. So, my death sentence is not until--at one point I think I actually calculated--I think I’m good up to Season 5 ½. (She laughs.) And, who knows? Who knows what’s going to happen?

Q: If Sun were able to get off the island somehow, what do you think would be the first thing she does?

Kim: I think she’ll probably check herself into a hospital. To make sure her baby is okay and that her health is fine. I have a feeling she might go back to Korea. It’s one of the things that we deal with. We’ve already shot Sun and Jin’s episode for Season Four, so that’s one thing that they do talk about because there is that hope. Yes, we are going to get rescued. We are going to actually get off this island. So what do you wanna do? So we talk about going back home and things like that.

Q: Sun has had sort of a checkered past--

Q: We’ve seen some kind of darker elements to her personality. We saw her kill Colleen in Season Three. If Sun could do absolutely anything in Season Four, what would you hope for the character?

Kim: Personally, it was so much fun just doing some of the action stuff. You know, Sun is pretty much the only character who’s sort of “kept.” She’s either safe in the caves or she just relies on Jin to protect her. But for the first time in Season Three, like you’ve mentioned, I actually have to kill another character on the show and so I was really happy. There’s a lot more to Sun than she’s been advertised to be. And there’s so much secret behind her past life, I can’t even keep up. For some reason she has issues dealing with just speaking the truth and just letting it out and we deal with more of that in Season Four, believe it or not.

Q: Will we ever get to see how she learned to garden or tend for those herbs?

Kim: I think she was born with it. I don’t think we’ll ever [explain that] because she’s had a pretty comfortable life and she’s from a very, very wealthy family--probably one of the most wealthy families in Korea--so either she did it just to survive on the island or she missed eating vegetables. Or, I don’t know. (She laughs.)

Okay, I'll admit that I'm a bit of a dork for asking that final question but Sun's herb-growing skills--which seemed to come out of nowhere in Season One, given her privileged upbringing--has always intrigued me as a bit of a dangling plot thread (though, obviously, not of the extent of the four-toed giant statue foot).

In the meantime, I do hope that the producers continue to mine Sun's character and backstory in this next season and, please for the love of all things Dharma, that they don't kill off Sun!

Anonymous said…
I can't believe Season 4 starts tomorrow night. I can't wait!!! And your fantastic interviews have been the perfect lead in to the big event!
1/30/2008

Anonymous said…
Sun is my favourite so I hope they don't kill her off anytime soon but I loved the part where she says that she calculated how long she has to live due to the curse of the pregnant women!
2/01/2008

Anonymous said…
great interview, i'm just barely catching up to the most up to date episodes via DVD, but i couldn't resist cheating to find out what would happen
3/27/2008