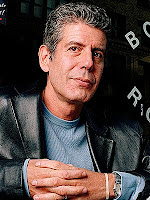 While a new season of the Travel Channel's No Reservations may have begun last week (shame on you for not watching!), I can't get enough of the series' host, Anthony Bourdain.

Bourdain, an accomplished chef (Les Halles, anyone?), novelist, and memorist ("Kitchen Confidential" and "The Nasty Bits"), and all around enfant terrible, is the kind of guy you want watching your back in a knife fight (literal or figurative). If you've ever read any of his books, you're aware of his biting wit, astute observations, and love of well-turned phrases, as well as his, er, excessive behaviors.

So I was overjoyed on Friday to learn from Televisionary reader Whitney about an in-depth Q&A with Bourdain in The Onion A/V Club about his writing, his discovery of food, his love for punk bands, and his disdain for Food Network TV personality Sandra Lee.

Well worth a read.

I wasn't a fan of the cut of the pilot episode I saw in early May, but I'll be watching a double-bill of the first two episodes just to give it another chance. On tonight's installment ("Gnothi Seauton"), Sarah tries to acquire false identities for herself and Johnnie boy and an old friend offers some help via his nephew, a gang member.

It's a brand new season of No Reservations on the Travel Channel; follow enfant terrible chef Anthony Bourdain as he travels the world in search of good food. In tonight's installment, Tony travels to Berlin, "a city that is both good and evil, eastern and western, repulsive and appealing." According to the Travel Channel website, anyway.

Anonymous said…
yes lookin forward to the next episode of sarah chronicles... they have story going.
1/14/2008

Unknown said…
Maybe I'm just easy, but I thought the pilot of Terminator was very well done. It was consistent with the movies (IIRC) and still provided some interesting new additions to the Terminator mythos. I hope it stays on track.
1/14/2008

Anonymous said…
Thanks for the link to the Anthony Bourdain Q&A. Great interview!
1/14/2008