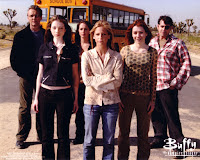 It pays to be a member... of the Paley Center, that is.

As with most years since I moved out to Los Angeles (five years ago, for those keeping score), I'm planning on attending as many William S. Paley Television Festival events as I can (and as many as my wallet will allow).

The festival's organizers--from the Paley Center for Media--have been particularly canny this year, teasing the audience with little glimpses into this year's lineup (March 14-27 at the Arclight, in the Cinerama Dome, no less), which so far includes panels for Pushing Daisies and Gossip Girl and a special evening with Judd Apatow.

If that wasn't enough, they then made me drool with sweet, sweet anticipation with their latest tantalizing unveiling of the schedule, which features panels for Chuck, Dirty Sexy Money, Dancing with the Stars, and Mad Men.

And, oh, a reunion of the cast from a little show called Buffy the Vampire Slayer.

Yes, that's right, ladies and gents, the cast of the cult show that spawned a creative genius, a television franchise, comic books, and more ancillary items that you can shake a stick at will come together for one night only.

I plan to be there for this momentous occasion.

In the meantime, the full lineup for the event--the festival's 25th--will be announced on February 4th. Mark your calendars and sharpen your stakes.

joy said…
Hate that Paley does all the cool stuff in LA. Not that the NYC stuff's not cool, but hello! we aren't getting a BTVS reunion. Sigh.
1/24/2008

Danielle C.F. Maris said…
Fantastic lineup this year! There are too many things I want to see. And I'm thrilled that they've moved it to the Arclight. Hopefully this means they will be able to fit more then ten people in the panels.
1/24/2008

Anonymous said…
Colour me jealous, I would do pretty much anything to see the cast reunited in the flesh.
1/29/2008