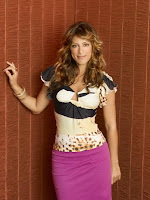 Samantha Who?'s Jennifer Esposito has been cast in a multiple-episode story arc on USA's Burn Notice, where she will play Michelle Paxon, "a Miami PD detective who becomes obsessed with uncovering the truth about Michael." Esposito is expected to first turn up at the start of Season Three of Burn Notice, scheduled to debut in June. (Entertainment Weekly's Ausiello Files)

Chevy Chase, who'll be seen later this season on NBC's Chuck, has been cast as one of the leads in NBC's comedy pilot Community, where he will play a community college student who has been married five times, opposite Joel McHale. Pilot will be directed by Joe and Anthony Russo (Arrested Development). (Hollywood Reporter)

Richard Dreyfuss (Tin Man) and Jason Biggs (The Pleasure of Your Company) will star in CBS comedy pilot Happiness Isn't Everything, about adult siblings and their parents who are "overinvolved" in each other's lives. Dreyfuss will play the family patriarch while Biggs will play one of the sons, along with Ben Schwartz. Project, from Sony Pictures Television and CBS Paramount Network Television, is executive produced by Mitch Hurwitz. (Hollywood Reporter)

Former pro football player Michael Strahan has been cast in FOX comedy pilot Brothers, where he will play a retired NFL player who returns to his hometown and reconnects with his wheelchair-bound brother (Daryl "Chill" Mitchell), injured after a car accident. Project, from Sony Pictures Television and Tantamount. is written by Don Reo and will be directed by Ted Wass. (Variety)

In a bizarre twist, auditions over the weekend for the next cycle of CW's America's Next Top Model turned into pandemonium, with six women receiving medical treatment and three people arrested on charges of inciting to riot and disorderly conduct. Reuters cited a report from a local radio station, which reported that "chaos erupted outside a midtown Manhattan hotel after a car belching smoke pulled up near the line of women late in the afternoon, leading to a cry of "fire" that sparked panic. Witnesses told the station the situation was compounded when a man leapt from a car and began grabbing women's purses." (Reuters)

NBC will once again meet with advertisers before the traditional upfront period at the end of May, scheduling meetings with advertisers on May 4th and 5th in New York, Chicago on May 7th, and Los Angeles on May 12th. The Peacock will not be offering another multi-media NBC Experience as it did in 2008 and is said to be looking at its plans for the actual upfront week, beginning May 18th. (Variety)

The Los Angeles Times looks at the current crop of midseason replacement series and stresses that, besides for highlights like FOX's Lie to Me, the networks have some major problems with this year's offerings both scripted (Castle, Dollhouse) and unscripted (Chopping Block, True Beauty). "Executives can talk all they want about time-shifting and competition and retention levels," writes Scott Collins, "but what the networks really need are hits." (Los Angeles Times)

Tandem Communications has teamed up with Stanley M. Brooks and Jim Head to produce two telepics based on novels of Patricia Cornwell's "At Risk" and "The Front" for Lifetime; move marks the first time that Cornwell's work will be adapted. Telepics will be written by John Pielmeier (Capture of the Green River Killer). (Variety)

The Los Angeles Times talks with Portia de Rossi, the star of ABC's new comedy series Better Off Ted, which launches on Wednesday, about Proposition 8, her new series, and those motherhood rumors. (Los Angeles Times)

Kimberley Nixon (Cranford) has denied reports that she will star in the fifth season of Doctor Who, saying that she hasn't even auditioned. "Absolutely nothing [is happening with Doctor Who]," Nixon told Metro. "They film in my home town so it would be good from a convenience point of view. I haven't heard anything - just what I've read in the papers. I haven't even auditioned." (Digital Spy)

Turner Classic Movies has ordered ten-hour documentary series Moguls and Movie Stars: A History of Hollywood, which will depict the lives of such early Hollywood figures as Darryl Zanuck, Carl Laemmle, Samuel Goldwyn, Louis B. Mayer, and the Warner brothers. Series, written and produced by Jon Wilkman, is scheduled to air next year. (Variety)

Anonymous said…
I'm very excited to see Portia de Rossi on Better off Ted. I've heard good things about the comedy and it looks like a really fun role.
3/16/2009

Is still think Castle has potential. :)