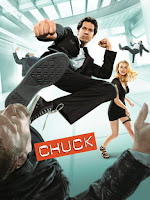 Chuck Versus the Mercenaries? Entertainment Weekly's Michael Ausiello is reporting that WWE champion wrestler Batista, Eric Roberts (The Expendables), and Joel David Moore (Bones) are set to appear in the fourth episode of Chuck's fourth season this fall. The trio will guest star as "Casey's former Soldiers of Fortune buddies from the Clinton era" who have "gone rogue and are back to seek revenge on their ex-comrade." The episode is entitled "Chuck Versus the Coup D'Etat." Season Four of Chuck is slated to launch on September 30th. (Entertainment Weekly's Ausiello Files)

While Maureen Ryan hasn't officially started at AOL Television (she doesn't until September 1st), that hasn't stopped her from landing an exclusive: namely that Katee Sackhoff will be returning to CBS' The Big Bang Theory this fall, where she will reprise her role as "Katee Sackhoff," the conscience of Howard Wolowitz (Simon Helberg), in an episode that will also guest star Melissa Rauch's Bernadette. "He's struggling with his feelings about Bernadette and them breaking up, and in pops Katee Sackhoff again," Sackhoff told Ryan. "I can probably say [the scene] won't be in the bathtub. I don't know for sure ... I can't imagine them doing the same thing twice, but you never know." Sackhoff told Ryan that she jumped at the chance to stop by The Big Bang Theory a second time when Chuck Lorre called her; Sackhoff is slated to appear in the September 23rd episode. (AOL Television)

Missing Manny? You're not the only one. However, Modern Family creators Steve Levitan and Christopher Lloyd have indicated that Rico Rodriguez's precocious Manny will be pushed front and center this fall in a plot about Manny going on his first date. [Editor: a plot that I revealed over on The Daily Beast last week in an interview with Steve Levitan.] "It's his first serious girlfriend," said Lloyd. "The first one he really feels he's falling in love with... It mostly turns into a clash with Gloria. Because in the Colombian culture the bond between a mother and son is very intense, and it becomes a little bit of a competition between the girl and Gloria for Manny... He realizes that he's almost forgotten to live his childhood and he tries to figure out a way to pack it all in, because he's only got one year left before he's a teenager." (TVGuide.com)

"Tastes like Marmite on socks." Neil Gaiman has been very close-lipped about the details of his upcoming Doctor Who episode, which will air next year on the Matt Smith-led British cult sci-fi series. But he did post a deleted scene from the episode in question--in the form of a script page--that sheds some light on just what a Gaiman-scripted episode of Who will be like. In this case, it involves the Doctor and Amy (Karen Gillan) about to sit down and eat, well, something foreign. (Neil Gaiman)

Entertainment Weekly's Michael Ausiello is reporting that the producers of Friday Night Lights--which returns for its fifth and final season on October 27th--tried to get Billy Bob Thornton to reprise his role as Coach Gary Gaines from the feature film that the series is based on. While executive producer Jason Katims isn't saying why, Thornton would have appeared in the series finale. “We wanted to pay homage to the movie, so we came up with an idea for a cameo," Katims told Ausiello. "But Billy wasn’t available." Not that you'll miss him--even if Katims was loath to reveal just what role Gaines would have played in the story arc involving Kyle Chandler's Eric Taylor. “We wanted the episode to be a rich and satisfying ending,” said Katims. “Nine-tenths good story and one-tenth nostalgia.” Hmmm... (Entertainment Weekly's Ausiello Files)

E! Online's Kristin Dos Santos has a sneak peek at the senior year awaiting the class of the CW's 90210, which she writes will involve "fresh plot twists, body shots, jet-skis, Adrian Grenier and vows to get 'wicked pissed.'" (E! Online's Watch with Kristin)

Judd Hirsch is set to guest star on ABC's The Whole Truth, where he will be reunited with Rob Morrow, who played his son on CBS' NUMB3RS. Hirsch, whose episode will air sometime in October, will play Judge Ruben Wright, described as "a distinguished and well-respected jurist who is accused of corruption and murder" who "asks Jimmy Brogan (Morrow), whom he has often chastised for colorful but inappropriate behavior in his courtroom, to represent him." (via press release)

NBC has delayed the launch of reality series School Pride, opting to shift the premiere date back by three weeks to October 15th. It will instead fill the timeslot with two-hour editions of Dateline. (Hollywood Reporter's The Live Feed)

ABC is spinning off its long-running talk show The View into a new hour-long afternoon version that would add a male perspective to the mix. Project, from executive producers Barbara Walters and Bill Geddie, would be shot in Los Angeles and would feature "five co-hosts discussing a range of topical subjects." Among their dream hosts: Bryant Gumbel, Alec Mapa, Jacque Reid, and E.D. Hill. (Hollywood Reporter)