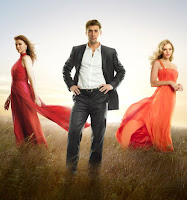 FOX began its full slate of TCA programming this morning with a session for its new fall drama series, Lone Star, which revolves around a charismatic con man who is married to two very different women in two very different Texas towns.

"I think the show will need to reinvent itself periodically and our challenge is to keep it going and keep it fresh and not to replay the same dynamic over and over again," said executive producer Amy Lippman. "We certainly have an understanding of where we are going it with it this season."

Should the series be renewed for a second season, Lippman says that the writers would look to turn the overall premise in a new way. There will also be numerous cons that will play through the season as well, said Chris Keyser, as well as the main con that Robert Allen is perpetrating. However, it will be set against the backdrop of a soap that enmeshes two families.

Series lead James Wolk has always loved acting, though admitted that his mother was an artist and his father a women's shoe salesman. Despite my own feelings about his performance in Lone Star's pilot, Wolk came across as charismatic and unerringly likable on the panel, though the creators did admit that they had originally envisioned his character, con man Robert/Bob Adler, as older. (As did I when I read the pilot script last winter.)

"Casting is a little bit [of a mystery]," said Chris Keyser. "We had originally thought of Bob as older."

The casting of Wolk led Keyser and the other executive producers to consider making Robert younger than they had originally intended and felt it opened up story possibilities about the time he spent with his father, etc.

But all of the producers underlined the fact that this will be a very aggressive series when it comes to plotting.

"We want to err on the side of being aggressive with plot," said creator Kyle Killen. "The things that you are interested in having answered, we want to be aggressive about taking them on... But it's not just about the Swiss watch mechanism of it all, it's about the characters and the situations that they approach they do as real people would."

"We want it to feel grounded and real," he continued. "And the bind that he's in to feel real."

And, like real people, Lone Star's characters aren't black and white when it comes to their actions.

"I [sold] it as Dallas without the cheese," said Killen said of the pitch. "I like to think we’ll go a couple of seasons without hair-pulling cat fights."

"I have no idea if this is a good idea for a network show," he admitted. "If it's a failure, it's going to be a spectacular failure."

Killen says that Breaking Bad and Mad Men are "dirty words" in pitch meetings because they represent a small percentage of viewers.

"When he's present with us, he's so present and in the moment that there's no reason why either of us would assume he had another life," said Adrianne Palicki, who also told the audience that she will be appearing in the final two episodes of Friday Night Lights' fifth season, about her character's relationship with Robert.

"He honestly believes that we are his soul mates," said Eloise Mumford. "That's so sad, it's like we're split souls."

Meanwhile, Lippman said that viewers should expect surprises from the first batch of episodes. There will be at least two episodes among Lone Star's first seven eps that "feel different" to the others, said Lippman.

Anonymous said…
Jace-your post made sense but it seems that show, perhaps doesn't? Just the brief outline of the panel seemed disjointed (to me).
A spectacular failure? or reinventions, provided there is a renewal?
Confidence seems low.

Breaking Bad, Mad Men and SOA are my top-tier shows. There is a quality to those that seems unmatched (perhaps Damages with more hiccups with Justified in the running). I also have high hopes for Boardwalk Empire and The Big C, too.

I do watch some network television but over the years I'm become more accustomed to better shows (for the most part) being on basic/pay cable.

I also put some trust in certain critic's :) to help guide me through a new crop of shows whether network or cable.
8/02/2010

[url=http://www.hairghdstraightenermall.com/]cheap ghd[/url]
tatic kill will make it safer to permanently plug Macondo from below through a nearby relief

well later this month. BP has started installing casing in the relief well to protect the


[url=http://www.hairghdstraightenermall.com/]ghd hair straighteners on sale[/url]
told reporters today on a conference call. Once drilling mud overpowers pressure coming up
amaged during the static kill and to prepare for injecting mud and cement for final