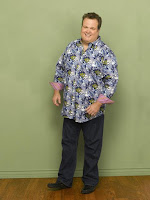 At the arranged coffee break with the cast and creators of ABC's Modern Family, Eric Stonestreet--nominated for a Best Supporting Actor Emmy Award for his star-making turn as Cameron--expressed far too much modesty when discussing his nomination for an actor who is so perfectly cast in a breakout role.

"To actually have people nominate me is beyond my comprehension," said Stonestreet about the Emmy nomination. "I think Ty [Burell] has a great shot at it. I told him from basically episode three that he was going to win the Emmy... But I just want to keep it in the family. I just hope that one of us is fortunate enough to be able to win."

Stonestreet said that he has saved a voicemail message from his father in which tearfully reacted to news of the nomination. "It says everything a 68-year-old Kansas man can say in three words: "Congratulations, Eric. Con-grat-u-lations.' And it's all through tears."

"Our first episode is entitled 'Earthquake,'" teased Stonestreet about the second season. "It's a little rumbler that turns into different things for each of the three families."

"I wouldn't say [Cameron] takes it all in stride," said Stonestreet, chuckling. "I think he's a little shaken. It catapults us into something for sure."

Stonestreet said that he's looking forward to getting to know more about Cameron's life in Kansas and his family.

"I'm excited to meet Cam's mom and family," he said. "That's going to be great. I originally wanted Kathy Bates [to play Cam's mom] but with her on The Office, I don't think it was that interesting for her to be on another [comedy]. Then I've thrown out Delta Burke as an idea. I just want someone loving and sweet. Who helped Cameron bloom into the guy that he is is someone down home and loving and fun, like my mom in real life. Maybe she could audition for the part."

Any chance of wedding bells ringing out for Cameron and Mitchell?

"I think that's going to happen," said Stonesteet. "Maybe not with the current legality about it or if that would be a destination, like maybe us going somewhere where gay marriage is legal. But, yeah, in the arc of the show, there's no doubt that that's going to happen but they have to save these great things for another time... There have to be moments [withheld until later] because we want to be on the air for seven years."

"We will get there eventually," he continued. "I just love how they've created Cameron and Mitchell. I'm real proud of the characters."

So how is Stonestreet handling being a cult hero among the gay community?

"I love it," said Stonestreet. "I just always as an actor wanted to play a character and the fact that this character is what people are getting to know me for and how much people have responded to Jesse [Tyler Ferguson] and me and the show is just a lot. To me, it just opened up another area of fans. I have female fans and mom and dad fans and a whole new genre of fans. I get lots of hugs and 'I can't believe you're straight' comments and 'Would you turn gay for me for an hour' kind of things. I'm flattered by all of it."

Then again, Stonestreet said he's just happy to have a job with some security.

"All I've ever wanted was a job," he said. "A job that I knew I could have for more than a day or more than three days. That's been my career for 14 years. Anything on top of having a job, of it being a good show, of it being a critically acclaimed show, being a nominated show, fans, is all icing on the cake. It's just awesome."

"I'm surprised by how much this show means to people," he continued. "Every person in the cast would tell you... we've had crying, heartfelt, emotional moments of 'you are my connection to happiness.' I've literally had a person tell me that she was having an awful year and that our show and me personally were her connection to happiness. That's a really powerful thing to be told. I take that with a great deal of responsibility."

So what's his take on Cameron? "I like to think of Cameron as 'floats like a butterfly, stings like a bee,'" he said. "Like Mohammed Ali-esque in a few ways. I want him to be an expressive person with his body. The shirts, all that stuff helps. I get the opportunity to say the words but I tell our whole crew--the hair, makeup, and costume [departments]--that you have the really awesome opportunity and burden to help bring my character to life because I rely on how my shoes feel when I'm Cameron."

"I get to help pick fabrics and stuff," he continued. "I said from the beginning that I wanted Cameron to be the type of housewife or househusband, if you will, [in this way]. There are housewives across America who wake up and keep their sweatpants and bedclothes on and take care of their kids and then there are housewives who, while their husbands are still home, go curl their hair and put on their makeup. Cameron curls his hair and puts on his makeup. He definitely takes the time to get himself ready so that if anything happens he is ready to go out into the world and be presentable."