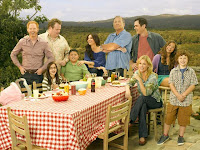 ABC took a break from their marathon of sessions today at the Television Critics Association Summer Press Tour to offer a much needed coffee break with the creators and cast of the ABC hit comedy Modern Family, nominated for 14 Emmy Awards.

The series, produced by 20th Century Fox Television, was one of the bright spots this past season on ABC's schedule and was championed by ABC Entertainment president Steve McPherson, who resigned from the network last week amid allegations of an internal probe.

Steve Levitan, co-creator of Modern Family and a long-time friend to McPherson offered a few words about McPherson's departure and his own personal reactions during an informal interview with me and a group of other reporters in the foyer of the ballroom.

"My genuine reaction was, uh, that sucks," he said in regard to McPherson's departure from ABC last week. "I'm sorry to hear it."

"We've had the best of Steve on our show," he continued. "He's a long-time friend. He was a mid-level network executive on Just Shoot Me. We go way back. We took Modern Family to ABC in large part because of Steve and because of that relationship and because he promised us that he would launch us well, which he did."

"He's always been a straight-shooter. While I hear wonderful things about Paul Lee, certainly I'm very sorry, on a personal level, to see Steve go. I like people who shoot from the hip and you knew where you stood with Steve and I respect that."

Meanwhile, Levitan also revealed that Nathan Lane will guest star on Season Two of Modern Family, where he will play the often-mentioned-but-never-seen Pepper, one of Mitchell and Cam's friends.