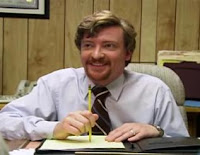 Could Steve Carell's Michael Scott be replaced by Danny McBride (Eastbound and Down) or Rhys Darby (Flight of the Conchords)? That's the word from Entertainment Weekly's Michael Ausiello, who reports that producers of The Office have reached out to the duo to check their level of interest in appearing on the series later this season. Showrunner Paul Lieberstein had told Ausiello that the producers are in talks about introducing a salesman to the Scranton team later this season, but that might not be related to the vacancy opening up from Carell's departure. "We haven’t settled exactly who will take over,” said Lieberstein. [Editor: As much as I love McBride and Darby, I still maintain that the network would be wise to wrap up the series after this season.] (Entertainment Weekly's Ausiello Files)

E! Online's Kristin Dos Santos is reporting that Britney Spears will be appearing on FOX's Glee, after all. Citing an appearance from co-creator Ryan Murphy on Ryan Seacrest's KISS FM radio show, Dos Santos is reporting that Spears will turn up in the musical tribute episode slated to air this season. "I will give you a little scoop," said Murphy, "which is that Britney will 100% be on the episode, which is exciting. She's going to come and join us and do a couple scenes... We are doing a Britney episode and people do have certain expectations because the show is sarcastic. But the Britney episode is so reverential about her, and it's so kind and it's about her music. It's not about her personal life, and I think Britney Spears is essential to pop culture, and I want to say thank you for what you've done, and we're encouraging you to continue to be doing as fantastic as you do. So that's not true. We're handling Britney with kid gloves." Which, apparently, includes having four of the kids being put under anesthesia and experiencing Britney Spears hallucinations. Um, okay. (E! Online's Watch with Kristin)

Bret Harrison is going to be tackling some lizards this season on ABC's V, according to Entertainment Weekly's Michael Ausiello. Harrison is set to recur in Season Two of the alien invasion drama, where he will play Dr. Sidney Miller, described as "an evolutionary biologist who may have the scoop on what caused the sky to turn red in the finale." His first appearance is set for the Season Two premiere, which will air in November. (Entertainment Weekly's Ausiello Files)

The Chicago Tribune's Maureen Ryan has a fantastic interview with Mad Men's Kiernan Shipka, who plays the indefatigable little Sally Draper. "She has a very rocky ride this season," said Shipka of Sally. ""In Season 3 and Season 4, I feel Sally is very beaten down and she has to cope with the separation (and divorce), but she has to do it on her own with a lot of trial and error. I think she has so many feelings bottled up inside. ...At the beginning of Season 3, her dad said he would never leave her. Now they're separated. it's hard for her to know her to trust because I feel the only person she can trust right now is herself." (Chicago Tribune's The Watcher)

Cougar Town creator Bill Lawrence has told E! Online's Megan Masters that he plans to bring the cast of Scrubs to Cougar Town. "I promise you either Sarah Chalke, Zach Braff, John C. McGinley, Donald Faison or Judy Reyes will be on the show this year," said Lawrence. "We call it the Friends of the Family policy, which is, I generally only bring on guest stars that are my friends or friends of the other actors or the crew so that we all know what they're like." (E! Online's Watch with Kristin)

Entertainment Weekly's Michael Ausiello is reporting that Kevin Alejandro (True Blood) has been cast in a multiple-episode story arc on NBC's Parenthood, where he will play a possible love interest for Lauren Graham's Sarah and a possible rival with Billy Baldwin's character. Alejandro will play Mike, described as a "blue-collar type who works in the warehouse at Adam’s company—where Sarah is now employed as well." Also cast: Zosia Mamet (United States of Tara), who will play Kelsey, a wealthy friend for Amber. (Entertainment Weekly's Ausiello Files)

NBC has given a script order to Peter Tolan's comedy Brave New World, which revolves around "the re-creation of the Pilgrims at a living museum." Project, from Sony Pictures Television, marks the return to broadcast for Rescue Me's Tolan. (Variety)

It's confirmed: former Lost stars Terry O'Quinn and Michael Emerson are "shopping around for ideas for a TV show," one that they hope would deal more with "age and fraility" and be less grim than Lost. Any takers? (Hollywood Reporter)

20th Century Fox Television has given a blind script commitment to John Hamburg, the writer/director of I Love You, Man, under which he will develop a project for the studio. (Variety)

TV Land has ordered six episodes of reality competition series Forever Young, which will "pair up young and old folks as they get to know each other and work together in a face-off against other young/old duos." Project hails from 3 Ball Prods. and Katalyst and is based on an international format. (Variety)

Marc Anthony is set to guest star on TNT's Hawthorne later this season, where he will play Detective Nick Renata, described as "a New York City cop who is investigating a kidnapping in Richmond" and who falls for Jada Pinkett Smith's Christina. (Variety)

Anonymous said…
Marc Anthony actually was on last night's episode of HawthoRNe, which also featured Aisha Hinds (from True Blood). It wasn't as awful as I expected.

Debbie said…
I think the four (4) hallucinations in Glee - all from Dr. Carl's dentistry - mean that Ryan Murphy has gone back on another promise. He said he would use the music selected this season to inform and support a storyline, but this sounds like a blatant excuse to fit in four guaranteed Britney songs, storyline and premise be darned...
8/11/2010