Elephant in the Room: ABC Executive Session with Paul Lee 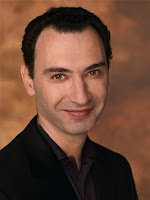 Appearing at the start of ABC's day on the Television Critics Association Summer Press Tour, Steven Brockman walked on the stage with a large pink elephant before saying of Steve McPherson, "Tuesday's statement still holds. It is literally all we are going to say on the subject."

It was perhaps an effort to address the elephant in the room--the sudden resignation of entertainment president Steve McPherson from the network last week amid allegations of an internal probe--but critics were already baying for blood.

The network's sacrificial lamb--newly installed ABC entertainment president Paul Lee--took to the stage after a session for ABC's new cop drama Detroit 1-8-7 was braced for an onslaught of questions about McPherson's resignation and that alleged probe.

But the Brit--an Oxford graduate who previously held positions at BBC One and Two, BBC America, and ABC Family--firmly refused to answer questions about Steve McPherson, instead attempting to disarm the crowd with his laid-back style, cut-glass accent, and polite deflection.

"I am, as you can guess, super unprepared," said Lee, after removing his suit jacket and addressing the crowd in his shirt-sleeves. The one thing he is sure about at this point? "I know that Modern Family should win the Emmy for best comedy this year."

Lee's presence on the stage today was a trial by fire for the executive who faced a ballroom filled with critics and reporters, each extremely curious about just what is going down at the Alphabet.

"There's a lot more people here than when we were launching Wildfire on ABC Family," he joked.

"I am a big fan of the network," said Lee, who said that he was already familiar with the network's programming and pilots from his role at ABC Family, given the cross-network promotional support that ABC series receive on the cabler.

"I've just been on vacation," said Lee, laughing genially. "I'm not answering your question! I've been dealing with my family. I can't really answer that." As for where Lee was on vacation--it had been widely reported he was in London--Lee was furtive about revealing details, other than saying alternately he was "on the beach," "a drive away," and "up the coast," before demurring that his wife would be angry if he revealed more. (His Irish wife, meanwhile, provided a convenient callback throughout the executive session.)

"I was very honored to be offered the job by Anne and to take it, but I can't talk about what happened with Steve," said Lee when pressed about the issue of his predecessor at the network.

"Quality storytelling is what it's all about," said Lee, naming a long list of ABC series that he admires, from comedies like Modern Family and dramas like Grey's Anatomy to reality programming like The Bachelor. "I think there's a whole lot of grand equity there."

His mission at ABC? "[To] take some risks, make some great shows, and still have some surprises... it's going to be great fun."

He also praised the quality of talent at the network, both in front of the camera and in the writers rooms. "There's an amazingly talented group of showrunners that go through the shows here... I think we've got a very strong lineup coming in."

Would Lee, following his experiences at ABC Family, look to rebuild TGIF or shift any specific programming from ABC Family? "They're different audiences... We went out of our way to identify a millennial audience and [ABC] is a key 18-49 demo... They are very different networks."

On testing: "I remember when we tested the British Office, it was the worst tested show I have ever seen in my whole career but that was because it took risks."

No Ordinary Family: "Genre shows over the history of broadcast have done extremely well... This is a family show. There are entry points for people of all ages."

"There's no question that this is a more difficult job than running ABC Family... We are all slaves to ratings," admits Paul Lee. "I had a show called Middleman that I loved. I adored that show. It was the wrong show for the network."

As for adding a second night of comedy to the lineup, it's not out of the question but won't be something htat will happen overnight. "I'd love to be in a position to add a second night [of comedy] but it's too soon," said Lee.

Still, there will be no changes prior to premiere week, as the ABC schedule is already "locked and loaded."

As for the state of ABC at the moment, here's what Lee had to say: "The reality is that we have had some real defining brands over the years, we have a really strong slate coming up... We do have our work cut out to do a lot. Everybody who sits in these jobs has to do that... I do think there's work."

"A deep gut is critical to this job. It's all about stories. And stories are about emotions."

While it can't have been easy for Lee to stare down the circling lions in the room, I do have to say that he acquitted himself quite handily, charming the audience with witty banter, an easy approachability, and casual savoir-faire. I'm curious to see just how Lee will put his own imprint on ABC in the months to come.